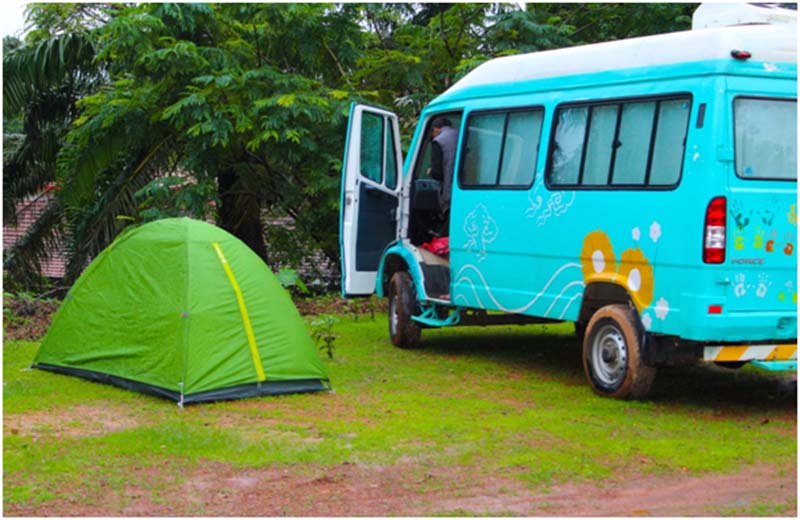 Ever since I watched Shah Rukh Khan driving along the road, with the song playing Yun Hi Chala Chal in the movie Swadesh, I wanted to go on a caravan trip. Being a wanderer, road trip lover and a hardcore traveler going on a trip in good old fashioned caravans were on the top in my bucket list.

Going on vacations for me isn't just about seeing the main spots and being back. For me, it's more about getting to know the place, its culture, and traditions. I enjoy talking to the locals, listening to the stories they have to offer and even sometimes learning about their hardships how tourism is all they have to make a living.

One late night while over the phone with my friend, we decided to do something offbeat this time. Immediately, I went through my bucket list and caravan trip was on the top. We decided to rent a caravan and take it someplace exciting.

As my friend is based out of Bangalore, we decided to explore someplace nearby as there are a lot of weekend getaways. After a lot of research, we decided to go Agumbe referred to as the Amazon rainforest of India. While doing my research I also found out that the famous TV show "Malgudi Days" was shot here. Being a huge fan of the show I felt even more inclined to visit this place plus I really love rains and Agumbe received the second-highest rainfall in South India.

So on 18th July, after wrapping up all my work at the office I boarded my flight from Bhubaneswar to Bangalore. My flight landed at around 11 pm. As usual, my friend was late, it was no surprise. After he finally came, he called the driver. He asked us to wait at the pickup point and then came not just our ride but also our home on wheels. I was super excited. 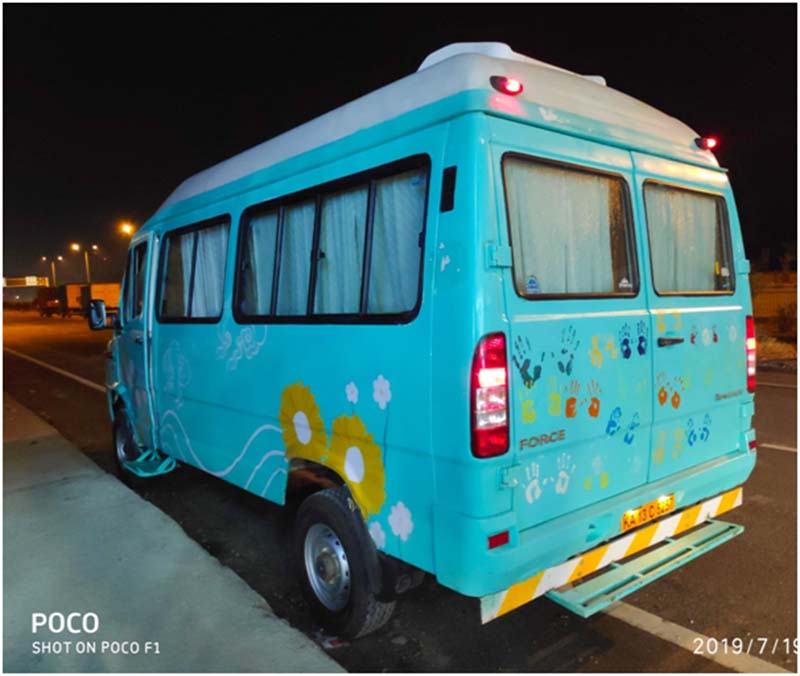 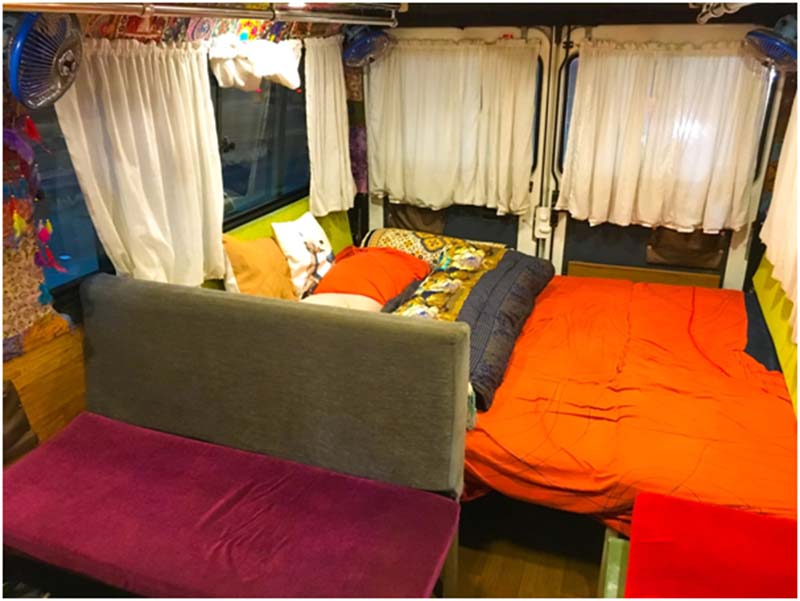 I was really amazed, it was like I had entered into my dreamland. The cozy sofas, the soft bed, the dream catcher, the intricate designs on the ceiling, even the cushions everything left me in awe. And how can I forget about the beautiful exterior of the blue caravan, with yellow flowers, the marks of hand on the back, everything showed how much effort was put into making this caravan. Apart from the beautiful decorations and designs, it was safe and comfortable too. It felt just like home.

We were greeted by Umair, he was very warm and welcoming. He showed us around the caravan. Starting from the switches to the cooking utensils he gave us a brief guide of everything.

So started our journey into the wilds of Agumbe. Funnily our first stop was the petrol pump. We parked our caravan and went to use the toilets. The first thing that I did after coming back was started taking selfies with our beautiful home and ride for the next two days.

At around 1 pm we stopped near a Dhaba to have dinner. We had chicken biryani. We parked our caravan at a spot and just dozed off happily in our new home. 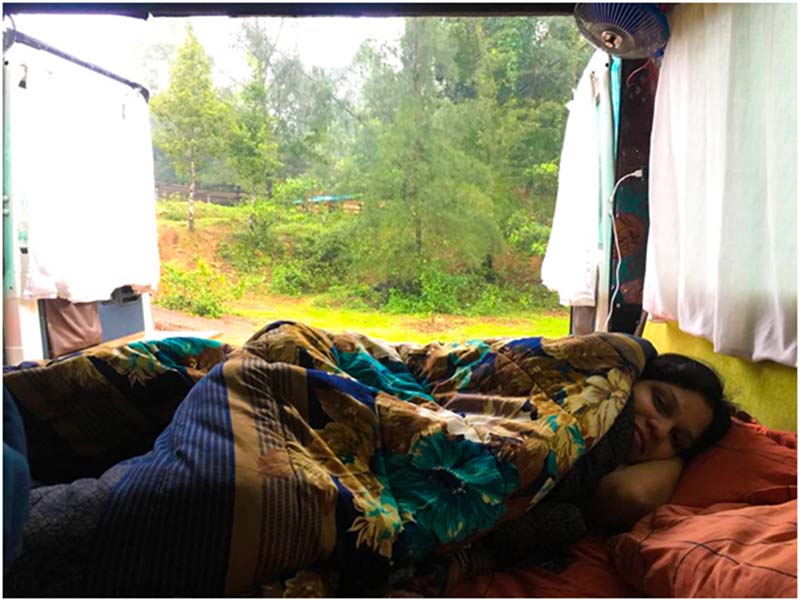 Early morning while we woke up, Umair had already started driving. The cool breeze flowing through the windows, pushing the curtains around made us want to stay in bed all day. We had reached somewhere around Chikmagalur. We stopped somewhere along the road for breakfast. It was a small shop but with an amazing view of the hill station. The aunty was very friendly and asked what do you want to eat beta? We ordered bread omelet and does. The food was very tasty and reminded me of my mom's cooking. 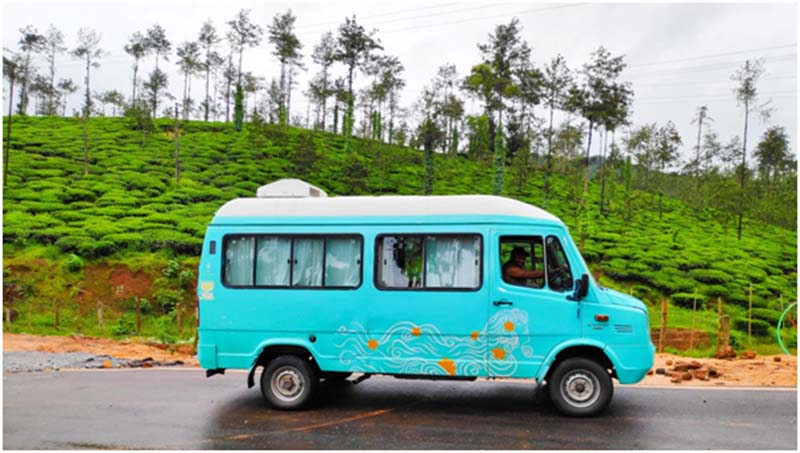 We were traveling in the wild with our home, it was an amazing feeling. On our way we saw children walking down the road, going to schools. We started reminiscing our days as children and we shared our stories of getting punished or sharing our meals.

Slowly we traversed into the jungles of Agumbe. The place was as beautiful as R.K. Narayan had mentioned in his novels. At around 1 pm we reached our campsite at Hingara nature stay. They gave us a warm welcome and showed us the place where we could park our caravan and also showed us the washrooms for our use. 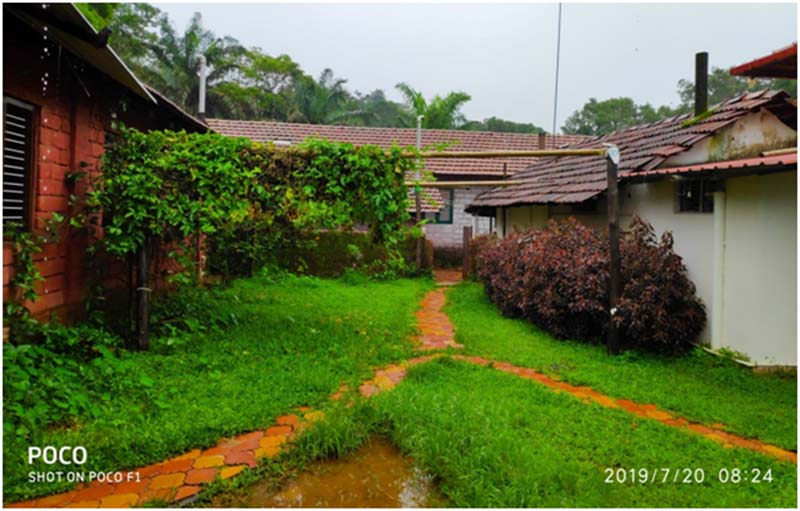 The place was in the middle of the jungle. Quickly I searched to know more about Hingara nature stay. To my surprise, it was a 350 years old heritage home. It was so well maintained, it barely looked 50 years. We took a lot of pictures all around the place. They arranged everything from trekking into the jungles, farm tours to yoga and village exploration.

After getting fresh, we went for lunch. The dining hall was one of a kind, traditional right in the middle of the homestay. They served us home-cooked Kannada style food. It was a new kind of taste for us but we absolutely loved it. The place had an antique look to it. The house was decorated with traditional cups, glasses, swords.

After the heavy lunch, we went back and started exploring the place on our own. Guess what we spotted a green snake. It was so well hidden among the greenery that I am surprised we could even see it. My friend got really scared, being a guy one would expect him to be fearless but I guess I was the brave one there.

After sometime we started playing the flying disc, but it kept hitting my nails and we switched to badminton. I really loved playing it even in all the mud. I was about to beat my friend with my amazing shots when it started raining like anything. No wonder Agumbe is named as the Cherrapunji of the south, I thought. 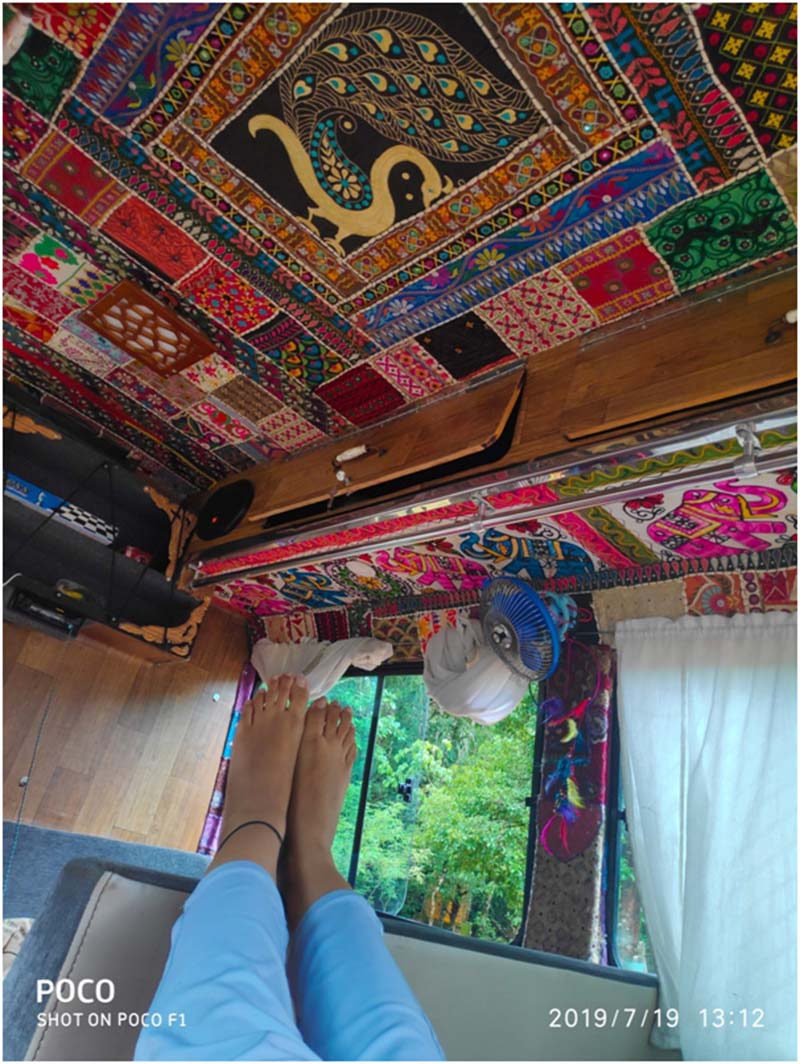 We stayed inside the caravan, waiting for the rain to pass and we dozed off. The weather was really nice, cozy and we woke up late in the evening. The rain had also stopped. We got up and had tea. In that weather, the tea felt like heaven. The tea acted like an energy drink, we were all ready for the photoshoot with the caravan.

Taking pictures with the beautiful caravan was a must. I wanted to make everyone feel not just jealous but wanted them to explore this new way of traveling. Making memories through pictures has always been a vital part of my trip. 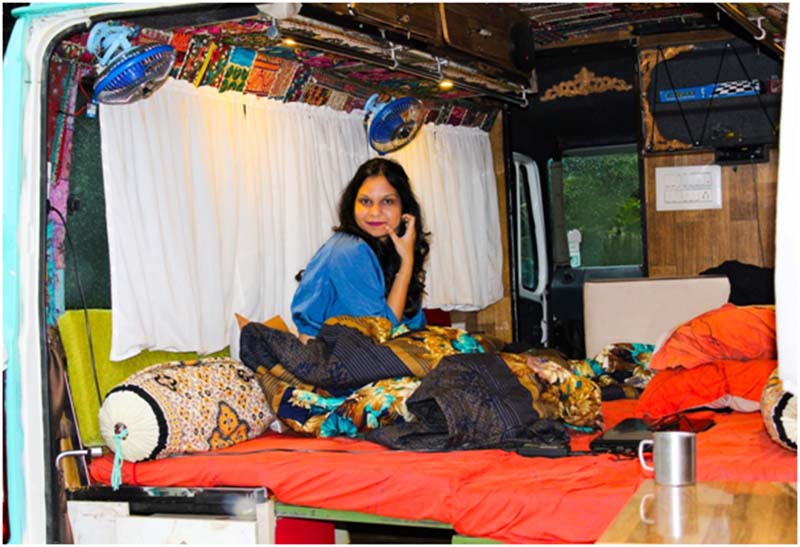 Umair had brought a tent for him to take rest and sleep. We helped in fixing up the tent too. It was our first time putting a tent, we got to learn something new.

After helping him we asked him to take our pictures with the caravan. For some time, we became models in our own world, specifically in our home. From standing beside the caravan to sitting inside the tent we covered all places.

We set up our next plan to explore the markets of Agumbe, unfortunately, we couldn’t as our caravan was stuck in the mud due to the rains. Umair tried very hard but couldn’t take out the caravan so we set out to explore on foot. We walked for a while, talked to a few locals and listened to the stories they had to say. It was a very different experience, getting to know the life of the locals from their perspective.

As it was getting dark, we returned back. We went directly to have dinner after returning. It was even better than the lunch. As the campsite was a bit away, we filled up our water bottles and returned to our home, the caravan.

We had the whole night ahead of us so we decided to put life to the much-heard advertisement “Netflix and Chill”. My friend, being a workaholic had his laptop with him. We decided to watch something mysterious and after a lot of this and that we settled for the movie The Journey to the Mysterious Island.

As in the movie they ventured into a mysterious island, it felt so relatable. Being in the caravan, under the silky sheets gave a very positive vibe that anything could happen, nothings impossible, I felt I could achieve my dream of being able to see the whole world.

The very next day we woke up to the mesmerizing view of the jungles of Agumbe, birds were chirping, insects were making noises and of course, my friend was snoring. There was no hot water, so we had a very chilly bath. After that, we had nice vada, idly with sambar and pudina chutney for breakfast. 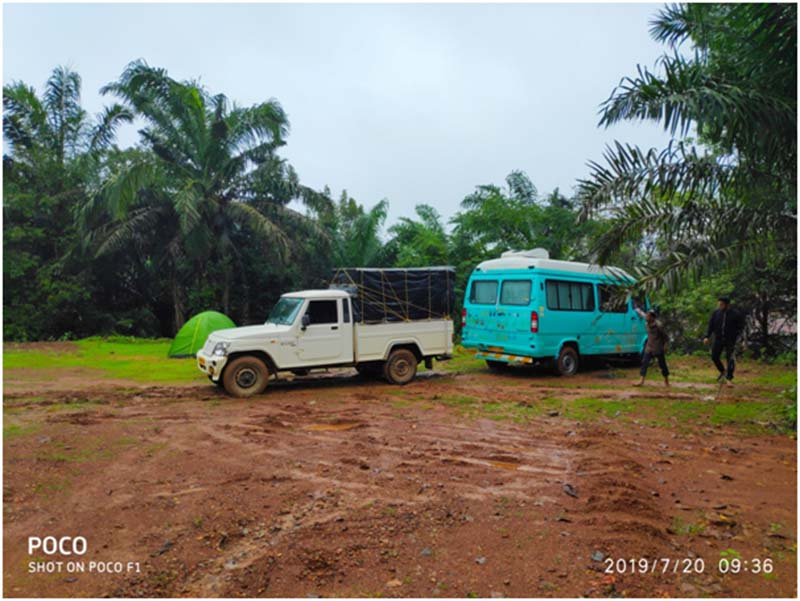 Then came the most difficult thing, taking our caravan out of the mud. The staffs of nature stay were very helpful. Initially, four to six people were pushing the caravan out of the mud but it didn’t help much. Later they brought a jeep and it was tied to the back of our caravan and finally after a struggle of two hours our home rose from the mud like the phoenix rises from its ashes. 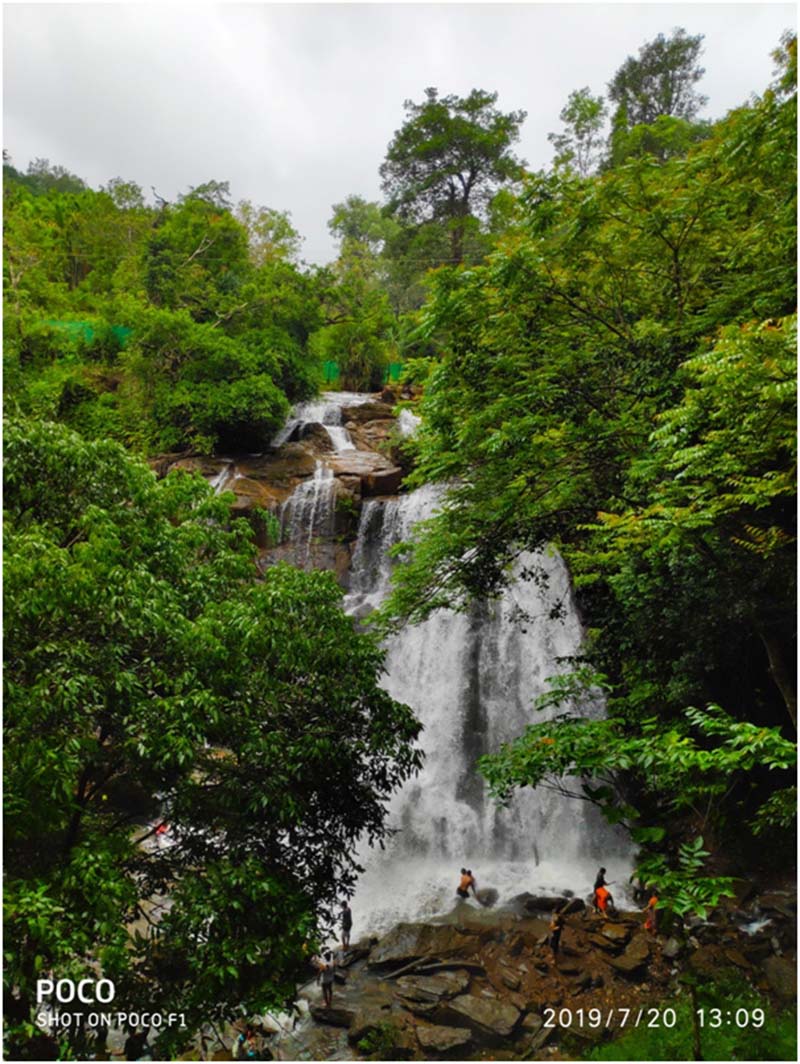 Next Umair suggested going to the Onake Abbi waterfalls, nearly 37 km from our campsite. So again the journey started and this time it was even more fun as the roads were getting narrower, the view was becoming more spectacular. The waterfall is hidden within the jungle, one has to travel through the deep forests to reach there. On the way, we also saw many peacocks.

The entry fee for the waterfall was Rs 10. While walking towards the falls, we could hear the water gushing, cutting through the rocks. The waterfall was majestic, huge and the view from the watchtower was breathtaking. After spending a short while there, we started our return journey to Bangalore.

On the way, we made a pit stop as the tea plantations and took some amazing clicks with our caravan. For lunch, we stopped at Majestic restaurant and had mouth-watering Biryani.

As time was passing by, I could realize the beautiful journey was coming to an end. We both could see each other’s face and know we didn’t want to leave this new home that we had built. We promised ourselves we would plan a trip in a caravan again, so we ended the trip on the note, until next time.
Last edited by a moderator: Aug 4, 2019

Staff member
Interesting trip Shalini and an awesome one. Got me interested in doing something similar ..... Thank you for sharing
S