We have been higher, but never so desolate or remote and steep
And yet we want to come back again and again for that adrenaline and endorphins.
Here's our experience...
June 13th 2016
Hunder (Nubra Valley) - Khalsar - Agham - Tangyar- Wari la - Sakti - Karu - Leh

We took the Agham one, the road till Agham is ok, broken tarmac in few places, a patch where they laying a new one. From Agham to tangyar the road is a mix of bad and broken tarmac. Once u come to tangyar and go up about a kilometer or so you will find a bridge that takes you to the other side of the river that you have been traveling all along so far. This is when your view will change you will be climbing up in the beautiful valley up to the pass.

The road from Tangyar up till the top is all gravel and broken tarmac with quite a few water crossings,mainly due to melting snow, these crossing can be challenging, menacing or just a puddle depending on the time of the day and time time of the season you happen to be there. If it’s cold and early in the season the snow won’t melt at that rate as when it’s little hot and later in the season.

In our last 15 km till Wari -LA top you will constantly be in the lower gears, you can feel that the air is thin. Bike will be struggling for oxygen and so will you. It will soon become evident that the famous low end torque which has always been RE’s forte is now no where, even when u you keep twisting that throttle bike will just scream harder but won't get that pull. This continues and gets worsened in the last 5 KM. BTW.. I was on a 2015 RE STD 500 with 10K km on the odometer, if you were wondering what we were riding. This is something we haven’t faced in any of the high passes be it Khardung La or Tanglang La.

Now, not only the bike but also you are struggling due to thin air, on top of that you add the fact that in the last 25-30 KM you haven’t seen a single soul or anything manmade, then you pile that up with the knowledge that the next human establishment is the Shakti town on the other side of the pass which is another 28 KM from wari la top. With the bike struggling to climb and you have a pillion with full luggage mounted on the bike you will start getting creeps, what happens if i get a flat? or if the bike refuses to climb? Ultimate cherry on the top of this misery will be your bike running out of fuel, we just hit reserve a couple kilometers from tangyar… ( Anyone planning a trip from leh to nubra - turtuk - wari-la should plan for carrying extra fuel from leh itself, Petrol station in Diskit town is not reliable, they did’t had petrol for straight 3 days when we were there)

With all this playing into your mind there came a point where we decided to take a break as the situation was’t getting any better, the thoughts building up in the brain weren't good either, bike was nearly saying that it would’t make it to the top and needed some rest. We were in the first gear quite a bit and throttle was almost all open. This is when i remember my mechanic showed me a screw on the carburator and told me to twist 2 turns if i feel that bike is not climbing, and that’s exactly what i did. The air at that point was so thin that dismounting the bike opening the toolbox for the screwdriver was a task in itself, the incline was such that even after resting the bike on the side stand, engaging in the gear so it’s not free to move, i also pushed a rock behind the rear tyre so it doesn’t roll back………………………may be this was panicking.
Realized that longer we stay the worse it will get as the low oxygen will start playing in on the mind and body, the only way to get over this is to keep moving , wifey said that the top shouldn’t be that far, and as per her calculation and we should be there very soon. This statement did put some courage in, had a few gulps of water and started again.

She was right! I think we would have hardly rode a couple of KM and we were at the top, and oh boy! what a feeling that was. Can’t be explained, she quickly dismounted and clicked a couple of pics of and we started our descent.

To our pleasant surprise and barring a few real bad kilometers from the top the way down was plain good tarmac. The views are just amazing, the accomplishment factor kicks in and your body releases in happy hormones . We did find some yaks on the way down, they just run crazy seeing you, like they haven't seen anything like us, all the time i was just hoping they did’t bump into us. 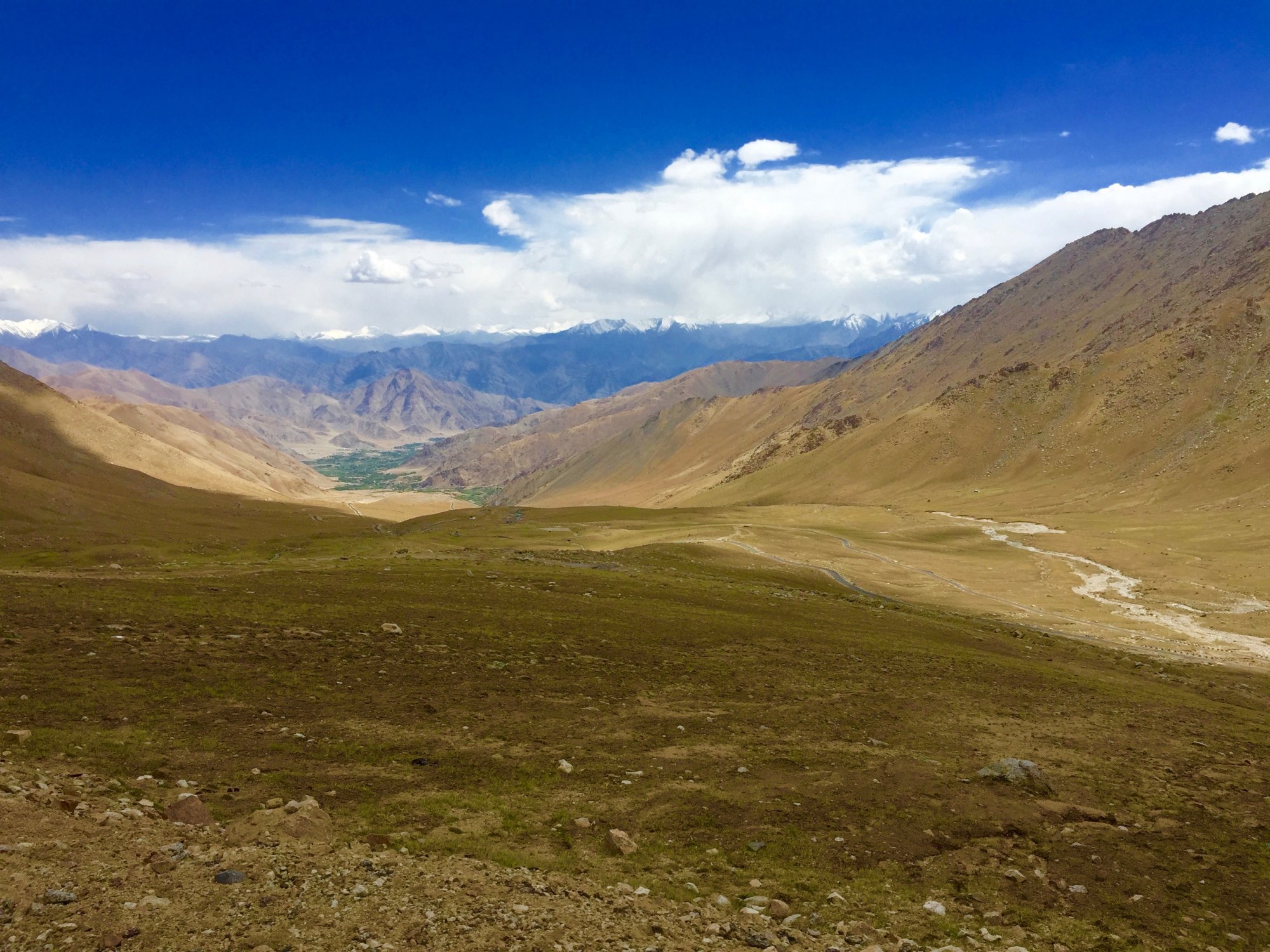 Wait, there is more to this the petrol story is still not over. Well to be honest i did’t give a S***T about it after we got on top, i knew i can do about 50 and that’s enough till shakti and then in Karu you have the pump, so stopped bothering about it and enjoyed the view and ride down. However we actually did run out, and as we trust that someone was watching and blessing or would have heard my wife's prayers, we rolled just to the entrance of the pump in karu, i pumped my fists in the air like i have won a medal or something.
Did i tell you wife and me did argue on our climb up and quite often i heard her mumbling something, i though that she is cussing, me, i have learned after getting married that ignoring is us mens best resort to avoid more of that . Finally, I asked feel good now that you have vented that out, she was like i ain't cussing but reciting hanuman chalisa..
well jai Bajrang Bali

Staff member
AWESOME BROTHER !!! Loved reading every bit of it .... reminded me of the time when I crossed the might Pass ....

Staff member
Oh and that third pic is just superb ....
B

Did you face any trouble with the pillion? Like did she have to get off at some places if the bikes refused to climb?

Bibek said:
Did you face any trouble with the pillion? Like did she have to get off at some places if the bikes refused to climb?
Click to expand...

That didn't happen fortunately, We did struggle a lot but climbed it .

Vargis Khan said:
AWESOME BROTHER !!! Loved reading every bit of it .... reminded me of the time when I crossed the might Pass ....
Click to expand...

Wari La is definitely a challenge ...