The Mystique Land Of Lahaul & Spiti

Staff member
"Where to go?" was the big question before Lahaul Spiti was finalised. As a matter of fact, it was the 4th and the last option in the list of places we could visit. Number 1 was Hemkund Sahib and Valley Of Flowers, 2nd choice was to go trekking to Swargrohini and Satopanth lake, 3rd choice was to revisit Ladakh and last of all was the Spiti Valley.

Due to heavy rain and cloudbursts in Chamoli and Uttarkashi, plan to visit Hemkund - VOF and Swargrohini had to be cancelled. I wasnt very keen on going back to Ladakh because we only had 9 days leave in hand which wasnt enough for the itinerary i had prepared for my next Ladakh Trip. So revisiting Ladakh also was postponed for a later time.

So that left us with only 1 option, Spiti Valley.

Spiti was last in my list not because i did not want to visit there, but because i wanted to be there in winter. But with no other choice left, i thought "why not go now and visit again in winter?"

Out of the 6 riders from the original plan, on the D-Day only 2 remained, last 2 dropping out half hour before the ride. 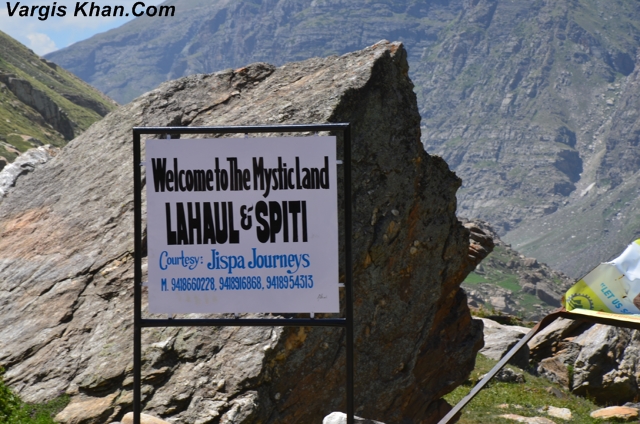 At 2 in the morning, both me and Narender were at my place making sure that we have packed everything. While we were still fumbling around with the bags, i noticed that i had left the door of my house open and there was a cop standing there, looking at both of us.

We both stopped and looked at him questioningly to which he replied,

I thought i did not hear him right.

"Kiska bachcha?" I was confused.

He ignored my question and tried to take a peek in.

And with that he again walked out, leaving us confused and we too got back to packing our stuff which was completed within next 15 mins.

And again the same cop appeared at my door step but this time it was 2 of them.

I didnt have the patience to explain so i ignored his question and replied.

"Shimla ki taraf" Once again i didnt have the patience to mention Spiti and then explain where it is.

"Kyun?" I questioned though i already knew the answer.

"Dekha jaayega" I shrugged my shoulders.

They stood at my door for a few more minutes, looking at us packing, and left.

Fortunately, i had one bungee cord left from my last year's trip to Leh and we used that to tie Narender's bag to my bike. For my bag, it was decided that Narender will hold it till we find something to tie it with on our way.

With all that done, by the time we started our journey, clock was showing 4 AM. Plan was to start by 2 AM so we were already 2 hours late.

Initiallly we wanted to enter Spiti from Manali's side but when i found out that this year onwards, it is mandatory to obtain a pass from Manali's SDM office to visit Rohtang, which could very well mean a delay of an entire day in Manali, we decided to go from Shimla's side and circle back to Manali. So first destination of the journey was going to be Narkanda.

Getting out of Delhi during day could be a headache with all the traffic but early in the morning with empty roads, we reached Sonipat in less than an hour and made the first stop to have a cup of tea.

While having tea, i asked the tea vendor if he had a rope that i could tie my bag with. He gave a short strap that is usually used to pack the cardboard boxes but it still did the job. Now both our bags tied on either side of the motorcycle, we continued our journey. 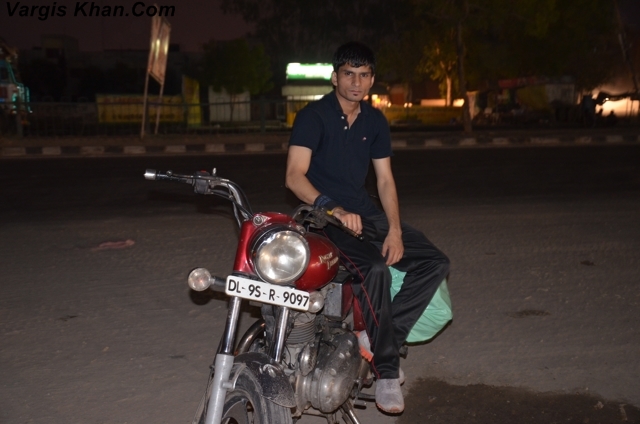 Staff member
With the sun starting to come up, next stop was at Moorthal for breakfast. 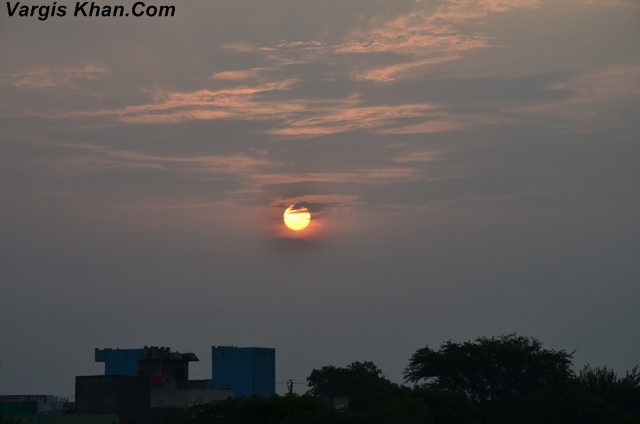 Staff member
It was a cloudy day with no sun visible in the sky at all and right after we crossed Karnal, Rain God smiled at us (or maybe frowned at us), something that we were ready for but not prepared for. So there was no other choice but to take it head on and keep riding in the rain. Luckily for us, it did not continue for long. It was only raining in a particular area and we crossed it within 10 mins, but fully drenched.
With another 80 kms to go for Chandigarh, we made another stop as we were both hungry again.
While entering Chandigarh, before the turn towards Shimla, i spotted a hardware store and bought a few metres of Nylon rope so that the bags can be securely tied.
Road from Chandigarh to Kalka was a nightmare the last time i travelled on it but with the new Himalayan Expressway built, it was a bliss to ride on it. In less than an hour, we had crossed Kalka and the ascent towards Shimla started. It was time for another butt break, to enjoy a cup of tea and our first view of the hills on this trip. 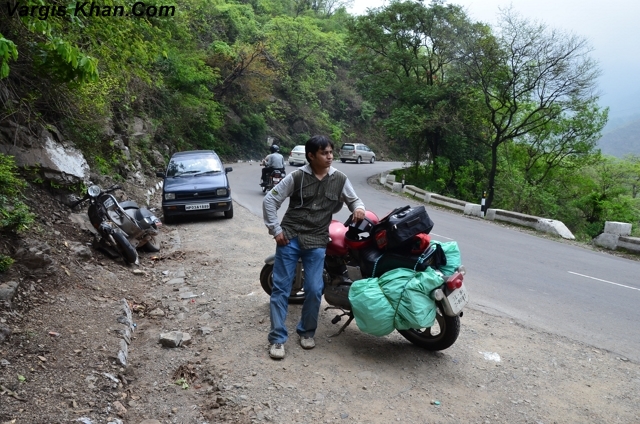 Staff member
We had not encountered rain again till now and i was starting to feel lucky but proven wrong pretty soon. The moment we entered Shimla, it started raining cats and dogs. I rode like a maniac and had crossed Shimla in less than 10 mins, out of the rain, but those few minutes had again left us completely drenched, and this time shivering.

By now i have realised my biggest mistake, not carrying any rain gear. By the time we reached Kufri, i saw a small Tibbetan market. Luckily, we did find a rain proof jacket on display and bought 2 for both of us. 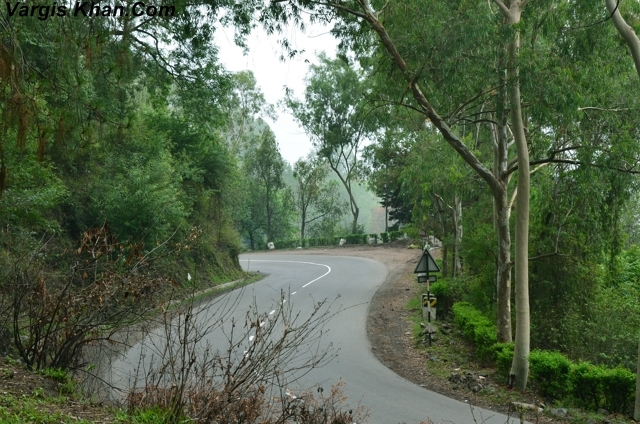 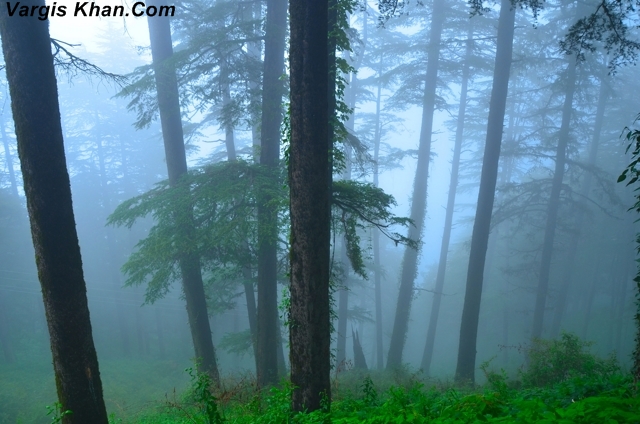 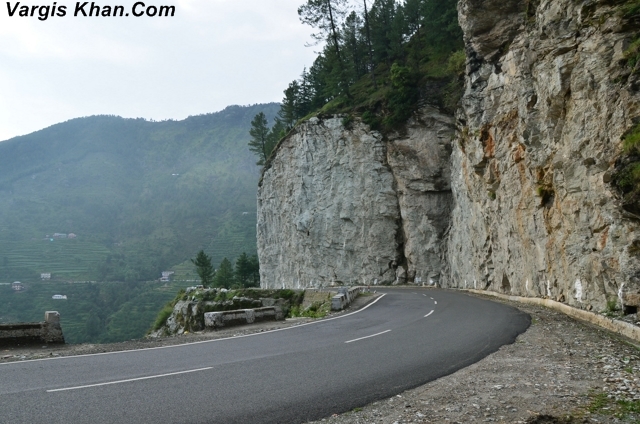 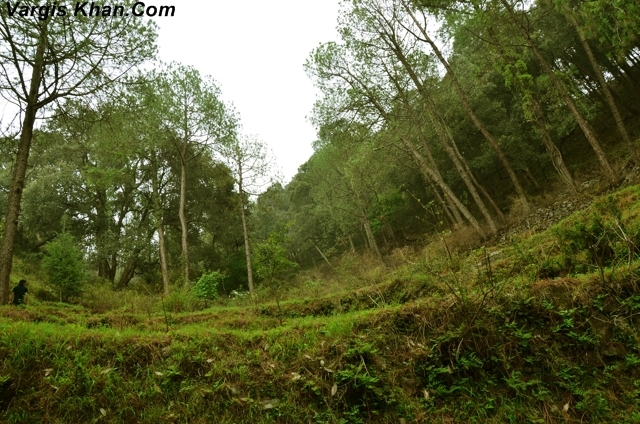 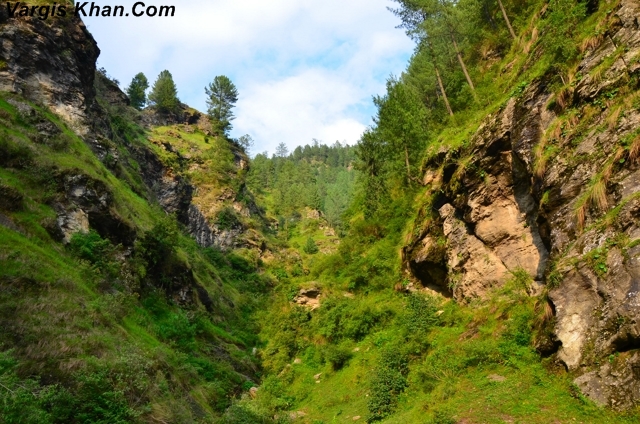 Staff member
We reached Narkanda at 5 in the evening and broke our journey. I went to the same hotel, Old Thorns, that i had stayed in during my last visit to Narkanda but found it closed. Right next to it was another hotel, Harsh Villa, that wasnt there when i came to Narkanda last and was still under construction. Owner of Harsh Villa saw me standing in front of Old Thorns, told me that it is closed this month and agreed to rent us a room for Rs. 500 for the night.

Price being reasonable enough, we checked in, took a shower and got out for a walk. 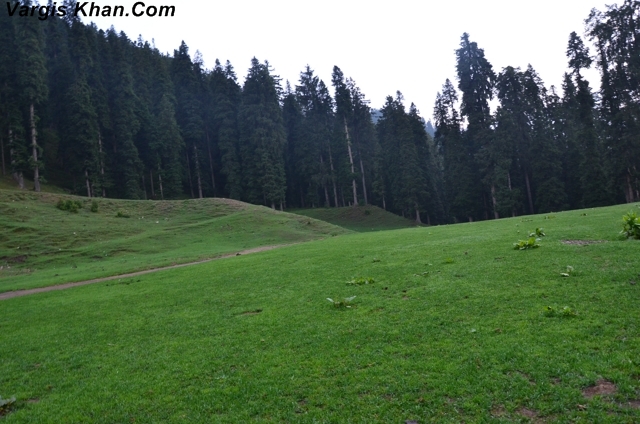 Staff member
Pretty soon night settled in and it was dark all around. We had dinner at a dhaba on main Narkanda Chwok for Rs. 50 / person (eat as much as you want), got back to our hotel and called it a day. 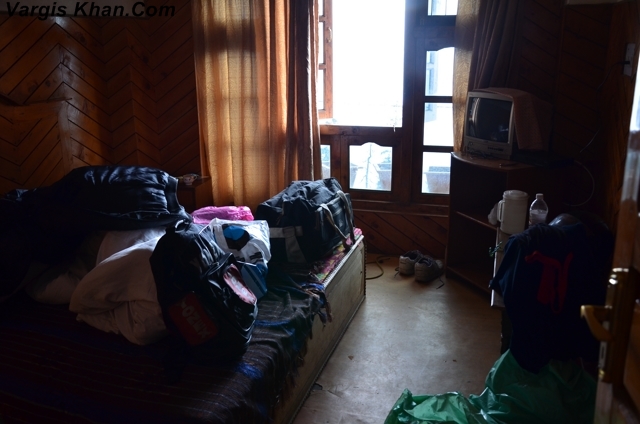 We woke up late next morning. Destination for this day was going to be Chitkul and i wanted to go visit Hatu Peak before leaving Narkanda. By the time we got ready and started on the ascent to towards the peak, clock was already showing 9.30 AM. We havent had breakfast yet but decided to visit Hatu Top first and then have breakfast on our way back.

Hatu Peak is 8 km from Narkanda. The narrow road that is barely side enough for one car is surrounded by pine and spruce trees. On top of the hill, ancient Hatu Mata temple is located. The peak offers spectacular view of the entire Himalayan ranges, snow clad mountains and in depths are the dense forests, green fields and apple orchards.

In about 15-20 mins, we were both standing on top of the peak. With Monsoon season on, there were clouds in the sky and we could not see much of the valley but the sight was spectacular still. 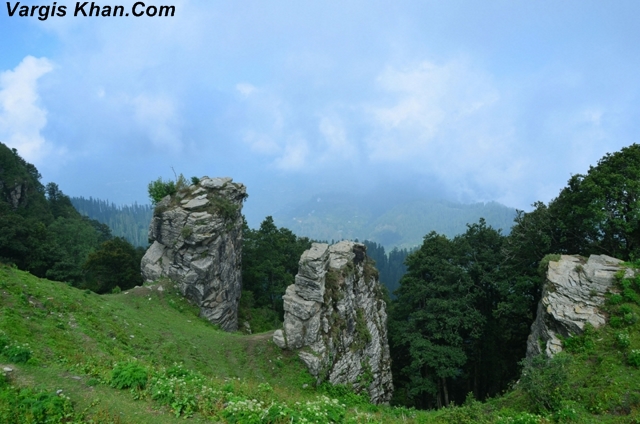 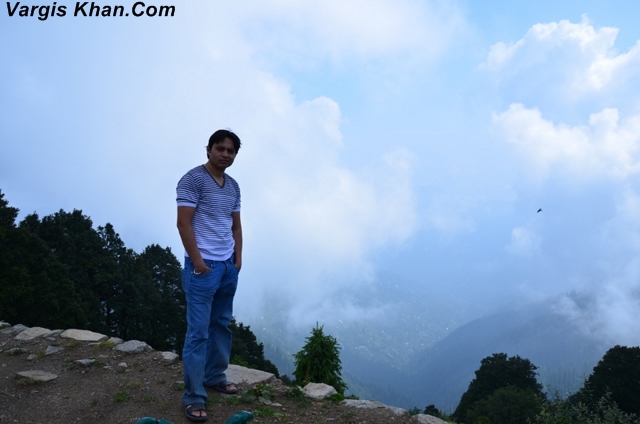 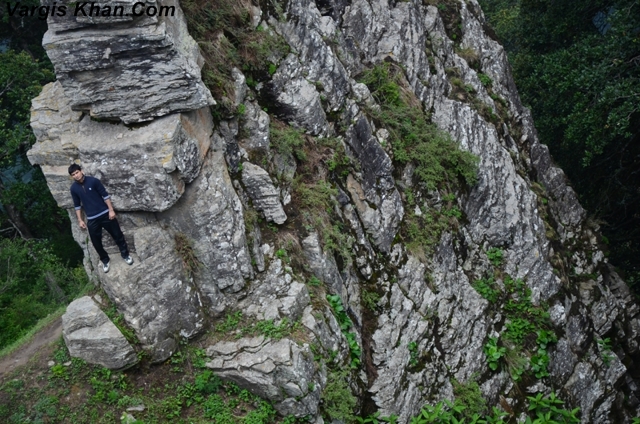