The town of Diu was an important port of trade routes of the Arabian sea since ancient times.

The documented history of the District of Diu begins with the Maurya rule Emperor Chandragupta Maurya had extended his supremacy over Saurashtra and Diu became a part of the Mauryan empire. After the fall of the Mauryan empire, Diu came under the possession of Indo-Greeks and then under the possession of Western Kshatrapas. After the fall of Western Kshatrapas, for more than the next thousand years, Diu formed part of the kingdoms of various Hindu dynasties that ruled over western India including Gujarat. The last Hindu king of the Vaja dynasty ruler of Somnath Patan ruled over Diu in the first decade of the fifteenth century. Thereafter, Diu came under the control of the Muslims Sultans of Gujarat who ruled Diu for the next one and a half centuries.

Due to its strategic importance, there was a Battle of Diu in 1509 between Portugal and a combined force of Turkey, Egypt, Venice, the Republic of Ragusa (now known as Dubrovnik), and the Sultan of Gujarat, Mahmud Begada. In 1513, the Portuguese tried to establish an outpost there, but negotiations were unsuccessful. There were failed attempts by Diogo Lopes de Sequeira in 1521, Nuno da Cunha in 1523.

Early in 1535, the Portuguese Governor De Cunha had led his expedition for the capture of the town in Diu but was defeated by the Sultan. However, around that period, the Gujarat Sultan Bahadur Shah's kingdom was overwhelmed by the Mughal invasion. Pressed by Mughal king Humayun on one side and the Portuguese at the gates of Diu, Bahadur Shah entered into a treaty with Nuno De Cunha on October 25, 1535, who agreed to assist Bahadur Shah against his enemy by land and sea. In turn, he received permission to construct a fortress at Diu and a site was granted for this purpose in the harbor. After the Mughal danger was receded, the Shah of Gujarat realized his mistake in allowing the Portuguese to construct the fort. So he tried to recapture Diu between 1537 and 1546 but failed. By 1546, Diu was under the firm control of the Portuguese.

Diu was so fortified so that it could withstand the later attacks of the Arabs of Muscat and the Dutch in the late 17th century. From the 18th century, Diu declined in strategic importance, due to the development of Mumbai.

Diu remained in the possession of the Portuguese from 1535 until 1961 when it was liberated under Operation Vijay. The island was occupied by the Indian military on 19 December 1961. The Battle of Diu involved overwhelming land, sea, and airstrikes on the enclave for 48 hours until the Portuguese garrison there surrendered. It was declared union territory of India, Goa, Daman, and Diu. Goa separated as a state in 1987 thus it became a part of the Union Territory of Daman and Diu.

I was quite keen to see the historical places of Diu but my wife and daughter were not. Their objective was just to chill and watch sunsets from any of the many beaches of Diu. So, I started alone around 9.10 am for Diu fort.

My first stop was at Jalandhar Beach which is just outside of the old walled city. Though this beach is located just a kilometer away from the city center, and yet it was quiet and sparsely crowded. There were just a couple of families on the beach. This beach is concave in shape with two ridges guarding the two flanks. 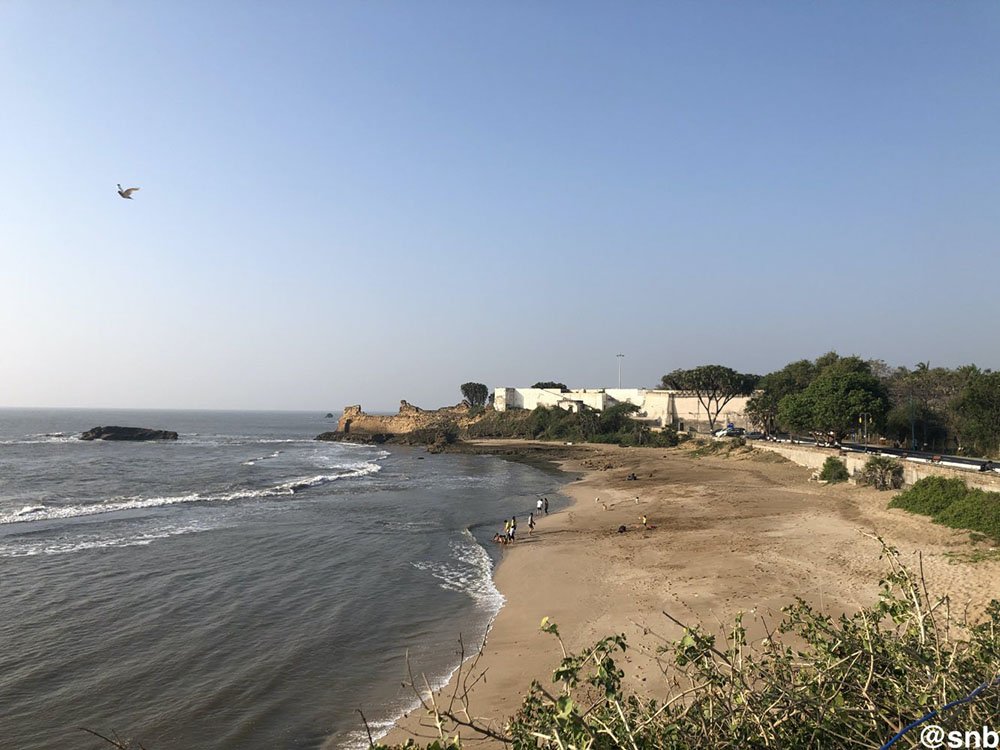 A well-tarred north-south road separates the walled city and the beach. The beach is at a depth from the road. Along the road, there is a parking lot, paved walkaway, and benches for seating. 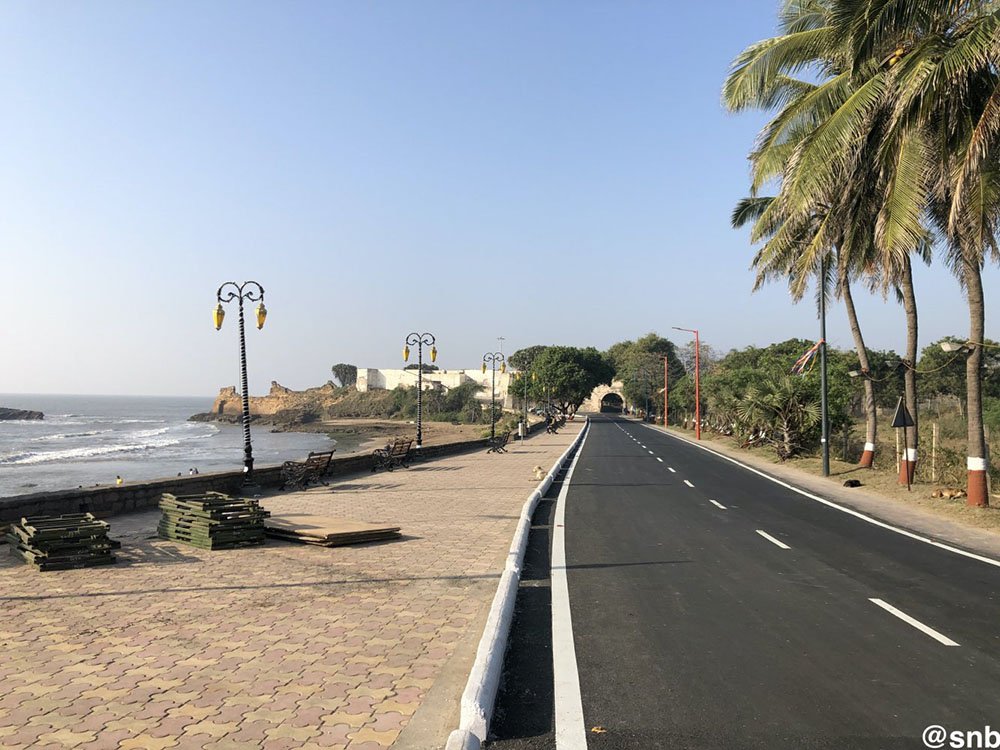 The beach was named after the mythological Hindu demon Jalandhar whose shrine is located on a hillock, close to the beach. A temple dedicated to goddess Chandrikais is also here.

I spent 10-15 minutes thereby walking one full round along the beach.

I reached the Church of St. Francis of Assisi around 9.35 am. This was the first church to be built by the Portuguese. Constructed in 1593, the Church of St Francis of Assisi is the oldest church on the island. The church is located on a hillock that overlooks the Arabian Sea. The church was built to replicate churches built in Europe. A long flight of stairs leads to the entrance of the church that was built on the eastern and the northern ends of the church. Today, it functions as a hospital

I took some photos from the outside and then moved on. 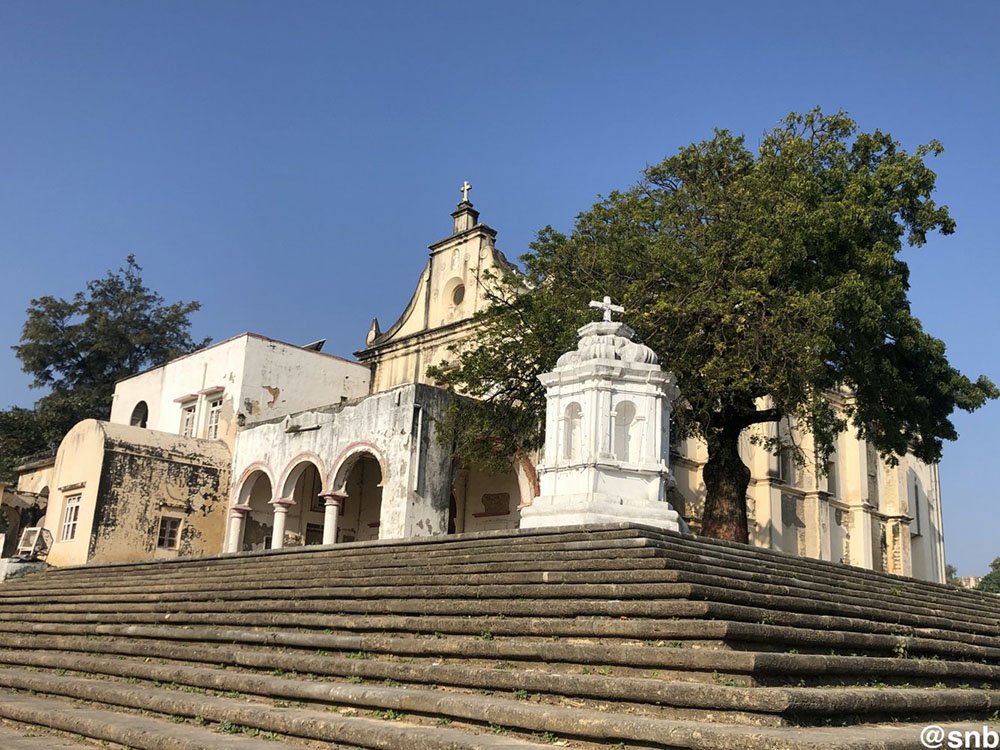 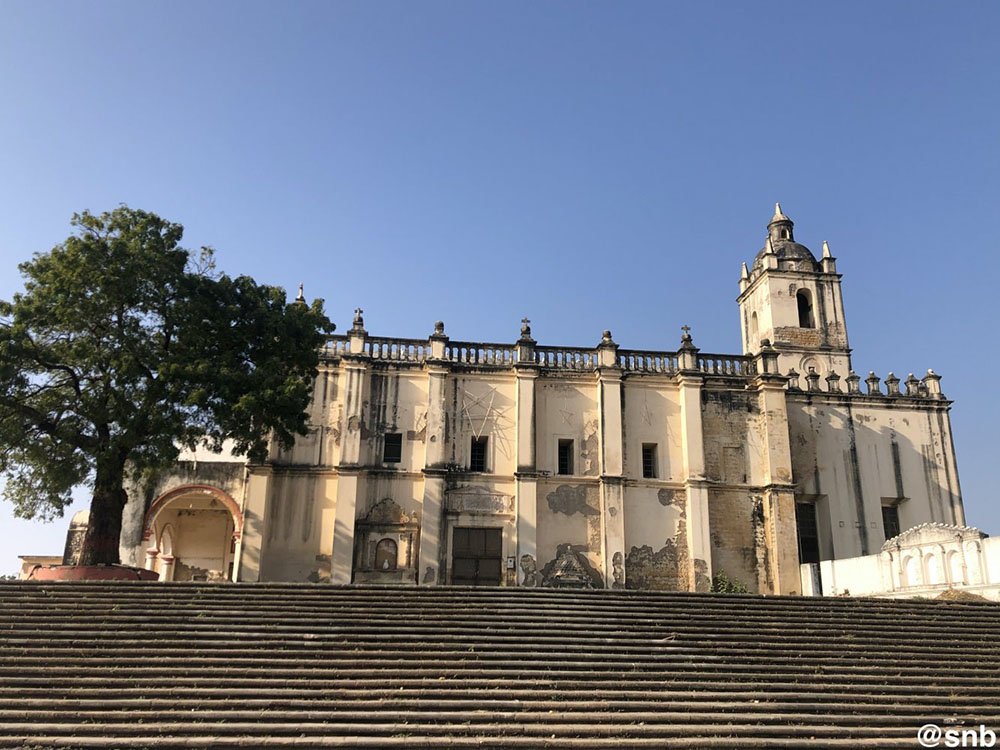 The next stop was Sr. Paul Church. Its construction is dated to 1601 AD. Built in the style of a similar basilica church namely, the Bom Jesus Basilica at Goa, its construction was completed in 1610 AD and dedicated to Our Lady of Immaculate Conception.

Here also I did not go inside and took some photos from outside. 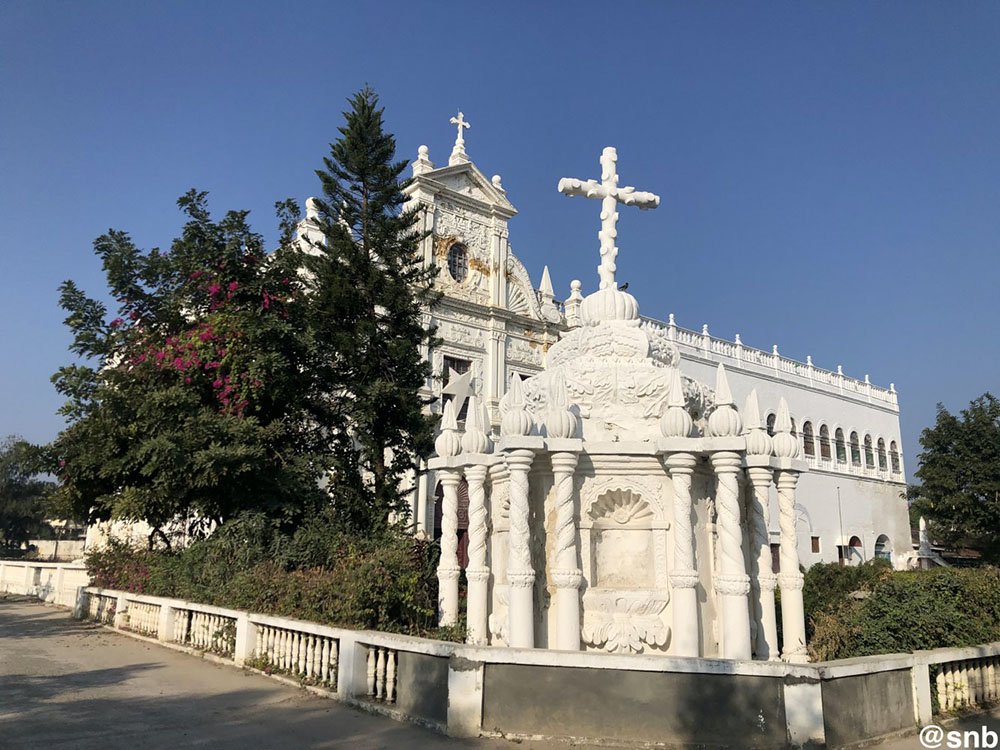 I reached Diu fort at 9.50 am. Diu is quite a small island and all the attractions are nearby. 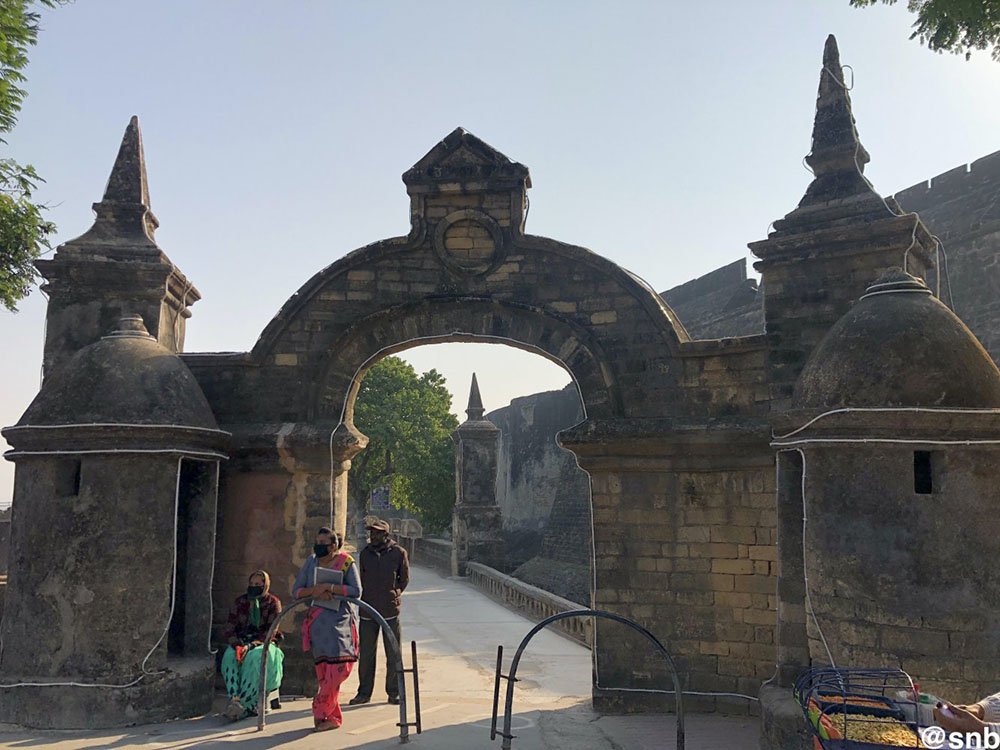 The fort is separated from the main island by a narrow creek and there is a causeway to reach the fort from the island. 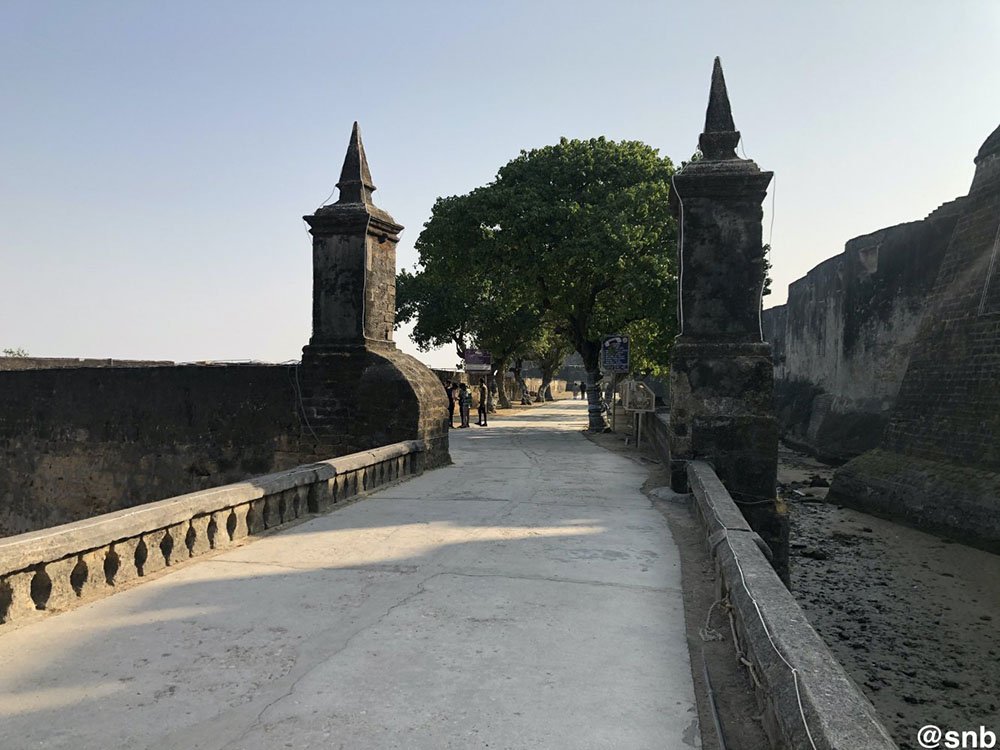 At the end of the causeway, just before the entrance of the fort, there is another causeway on the left-hand side. 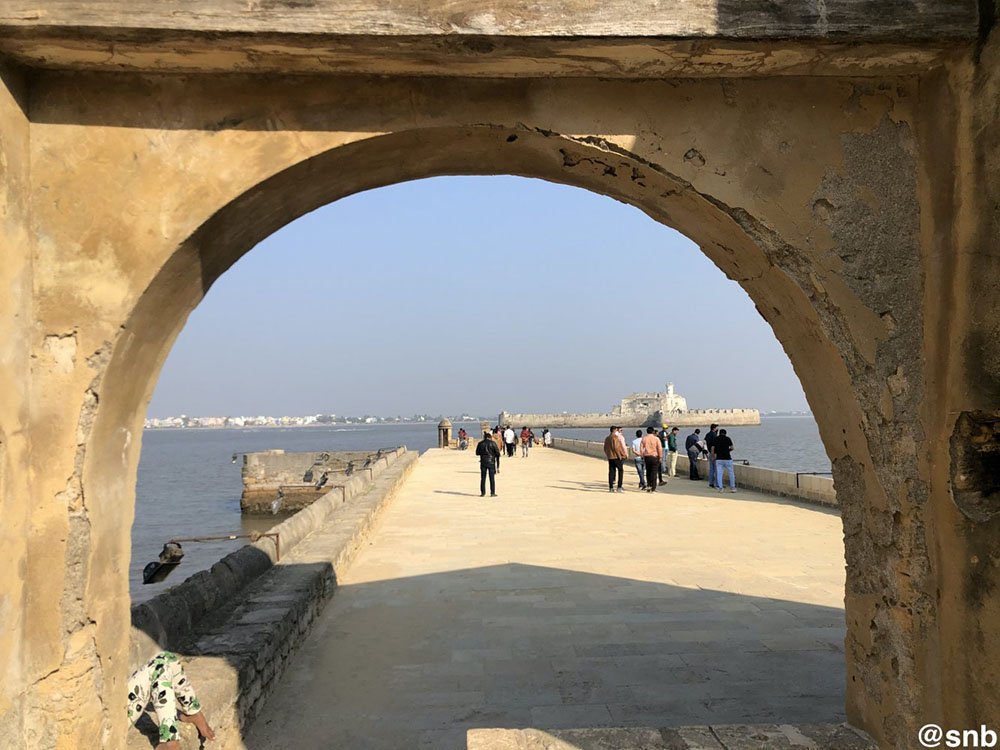 At the end of that causeway, there is a canon aiming Pani Kotha at a distance. 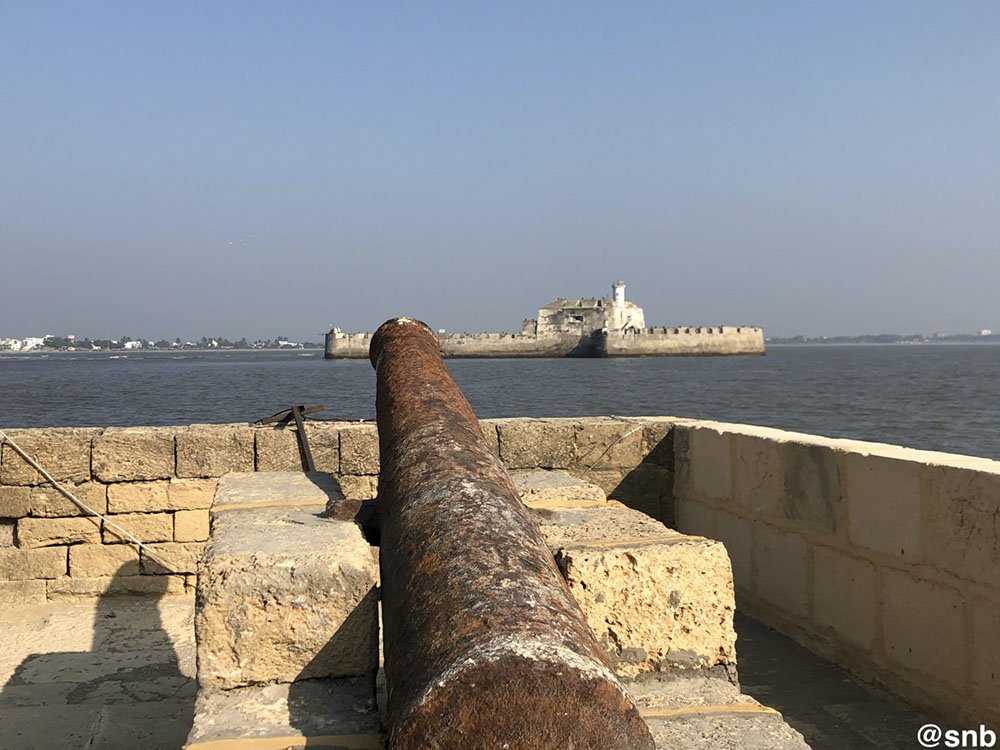 Pani Kotha or Fortim do Mar as named by the Portuguese is a 12th-century edifice. Once a fort it was made to look like a ship to mislead invaders. It is located on an islet at the mouth of the creek of the Arabian sea. Pani Kotha was later used as a prison and was controlled by the Portuguese along with the Diu fort. This stone construct was fortified in the year 1588 by adding a few structures. Besides this, a small chapel was erected in the year 1638 as a dedication to Our Lady of the Sea. Pani Kotha also houses barracks, a warehouse, and a lighthouse. 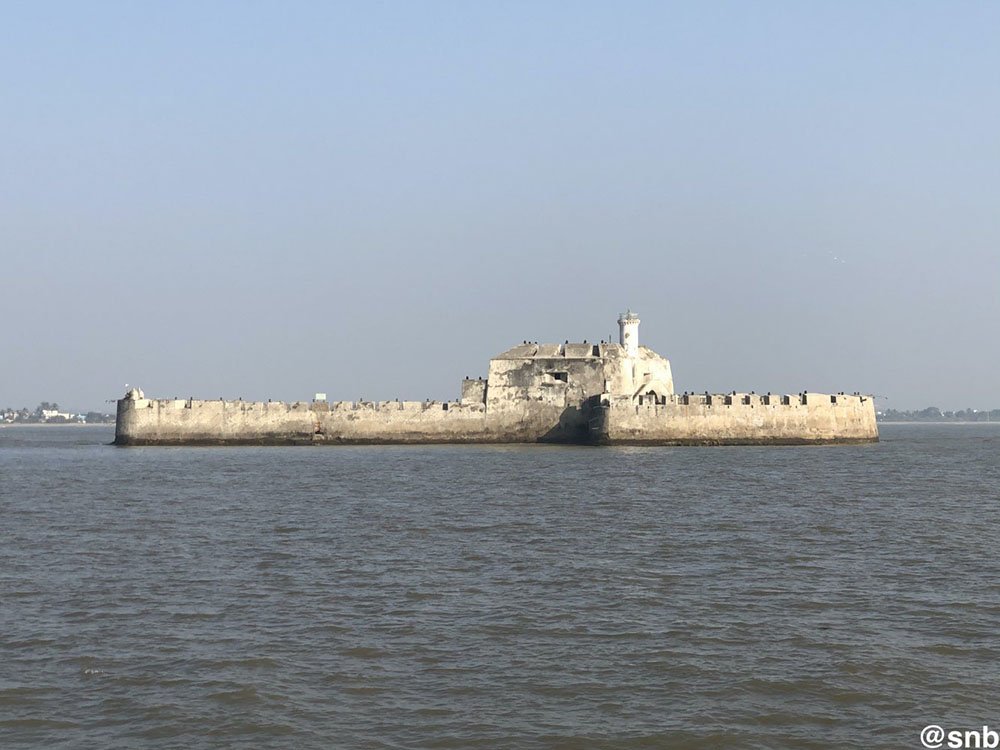 The original fortification was done by Nuno-De-Cunha in 1535 CE. Subsequently, it was rebuilt by Viceroy D. Joao-de-Castro after 1546 CE.

The entrance of the fort is through double gateways. The gateways and the landing pier are protected by a bastion called St. George, considered to be the oldest part of the entire fort. This bastion was erected by Capt. Nannel-de-Souza-de-Sepulveda, who also extended the rock-cut moat from sea to sea in 1542 CE. 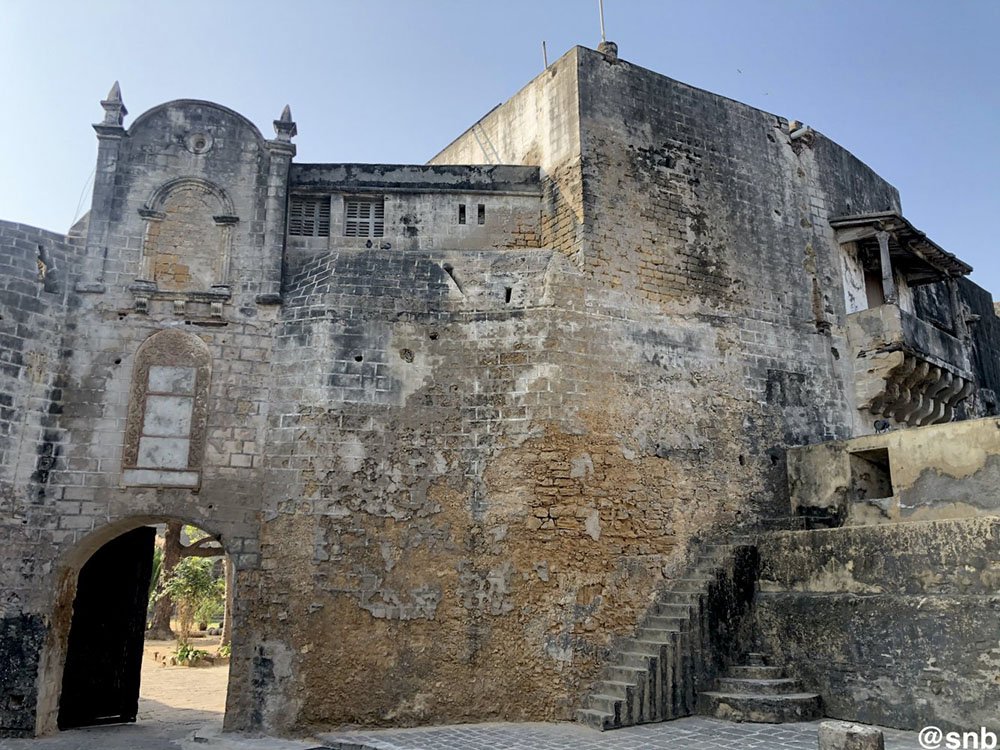 The fort is surrounded by the sea on three sides and on the land side by a deep moat cut through the solid rock. On the west side, there is an imposing double line of bastions facing the city. It was on this land side of the fort that the Gujarat Sultanate army under Khwaja Safar and his son Rumikhan had directed all attacks in 1546 CE. All the bastions covering the fort were fitted with canons. 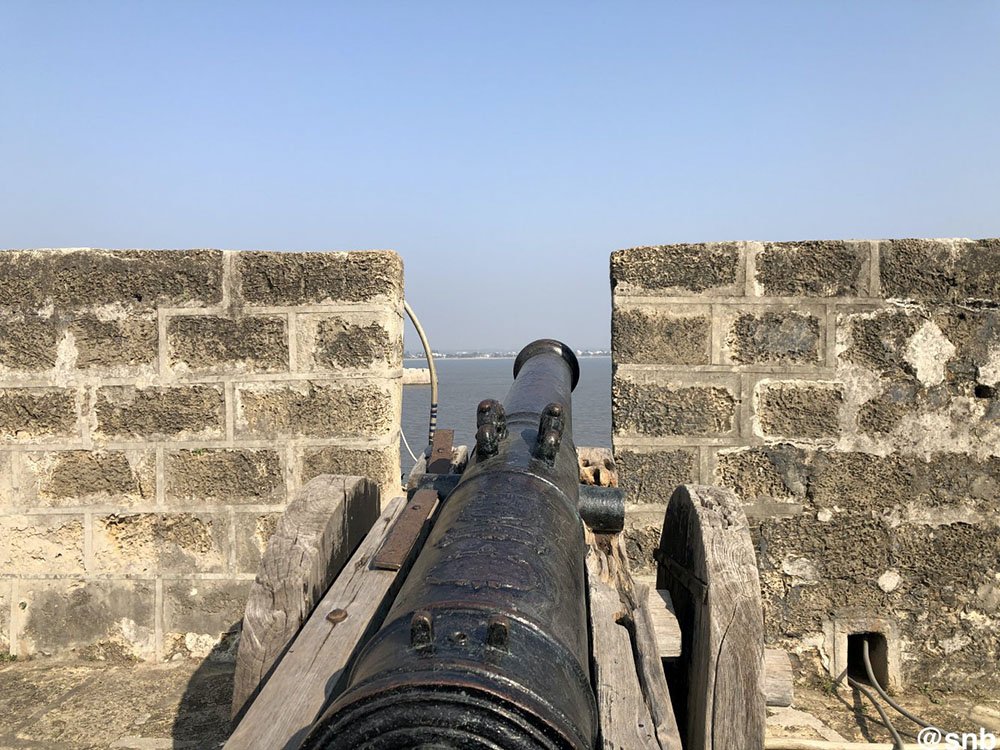 The St. Luzia bastion, constructed in 1650 CE forms the extreme point of the fort to the eastern side. In between the bastion of St. Luzia and the main bastion at the Gateway are the cisterns of “Kings and Queens”, so constructed as to collect the rainwater. 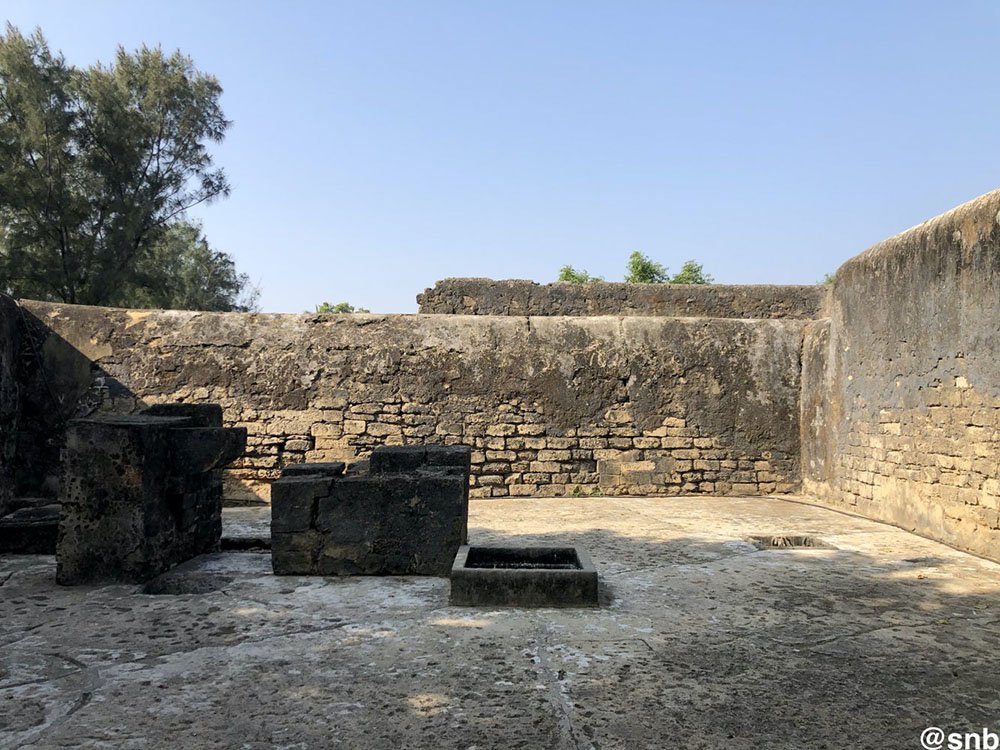 The total area of the fort is 56763 sq. meters. It had facilities for storage of all kinds of arms and ammunition, rations, and water to withstand the siege of longer duration. Many underground escape channels were there. Within the area of the fort, there were Governor’s house, the prison, barracks for garrison, state offices besides several churches.

The main residential area of the Fort 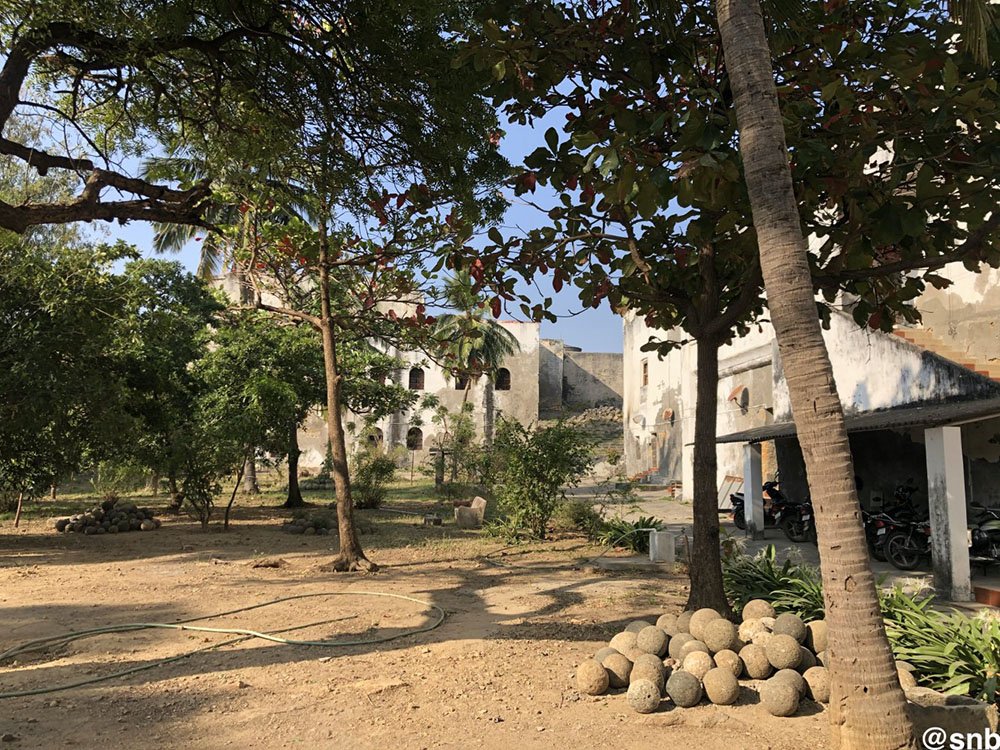 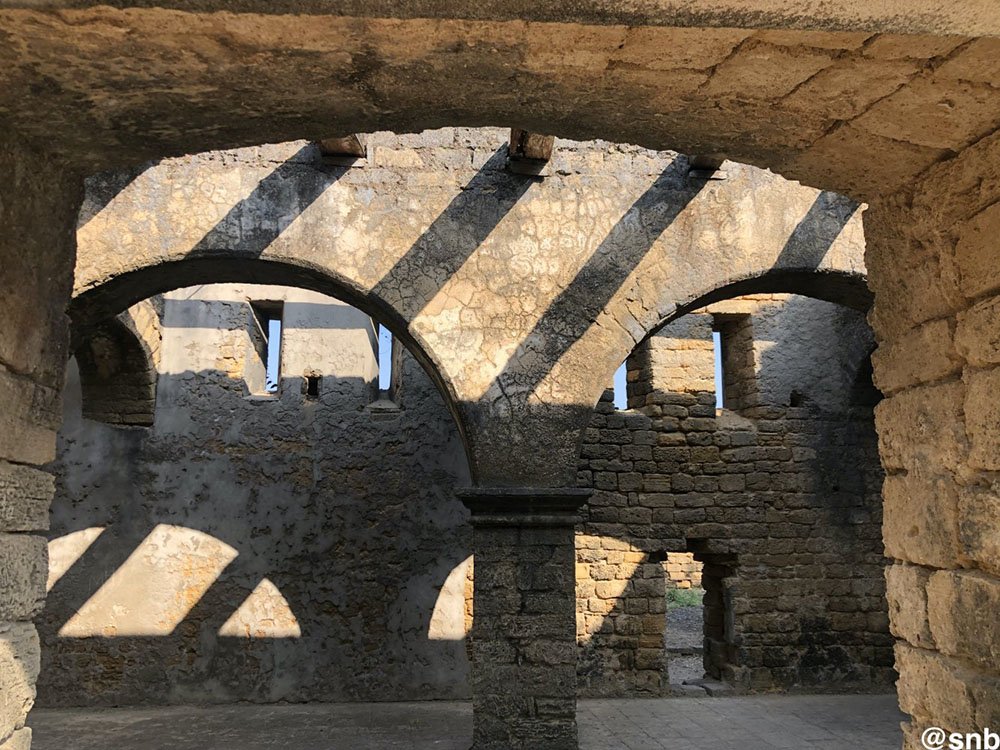 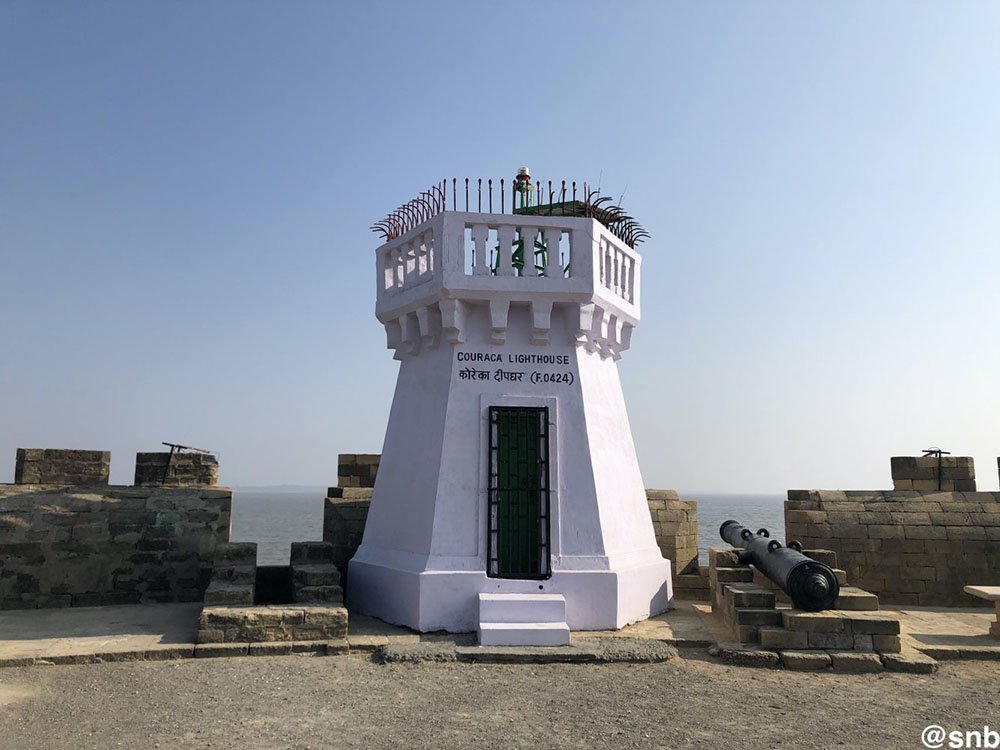 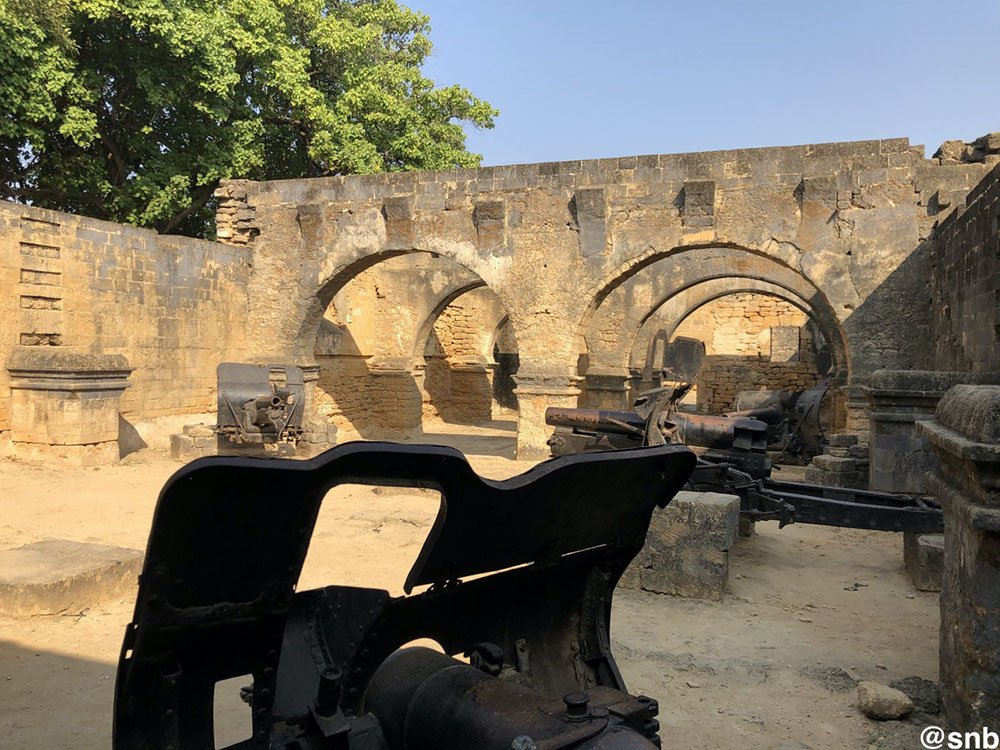 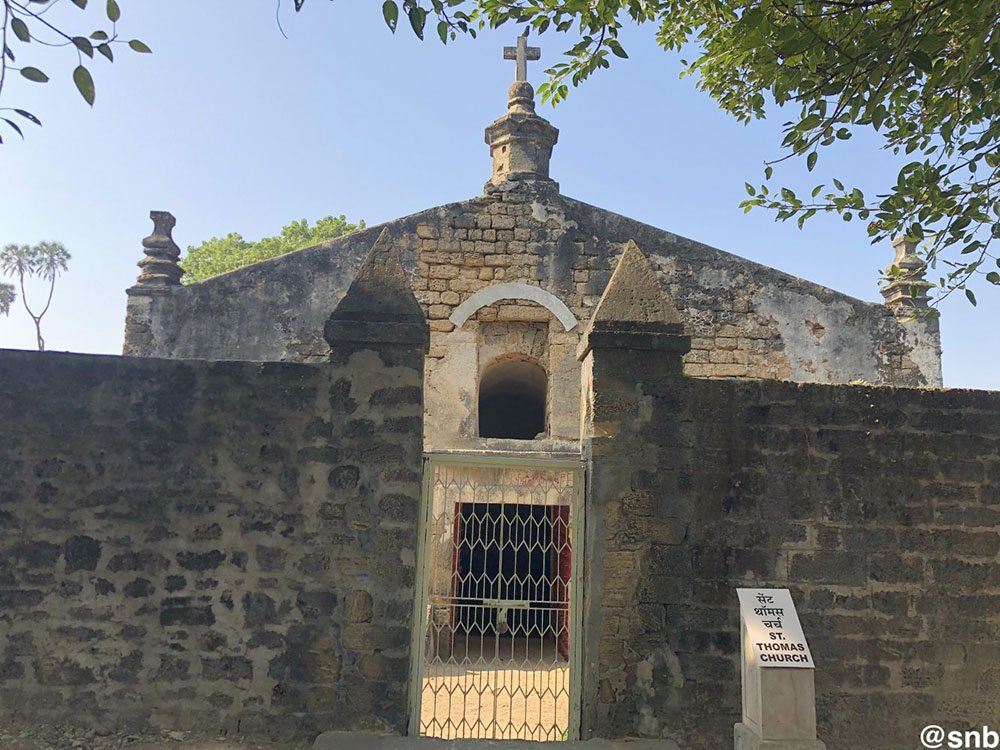 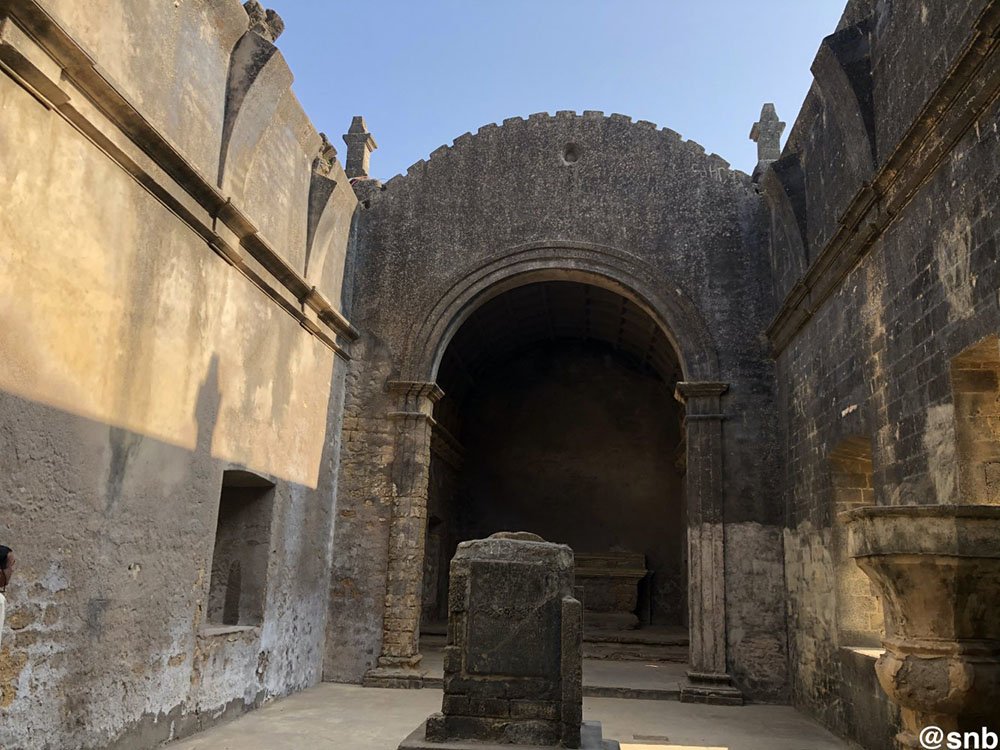 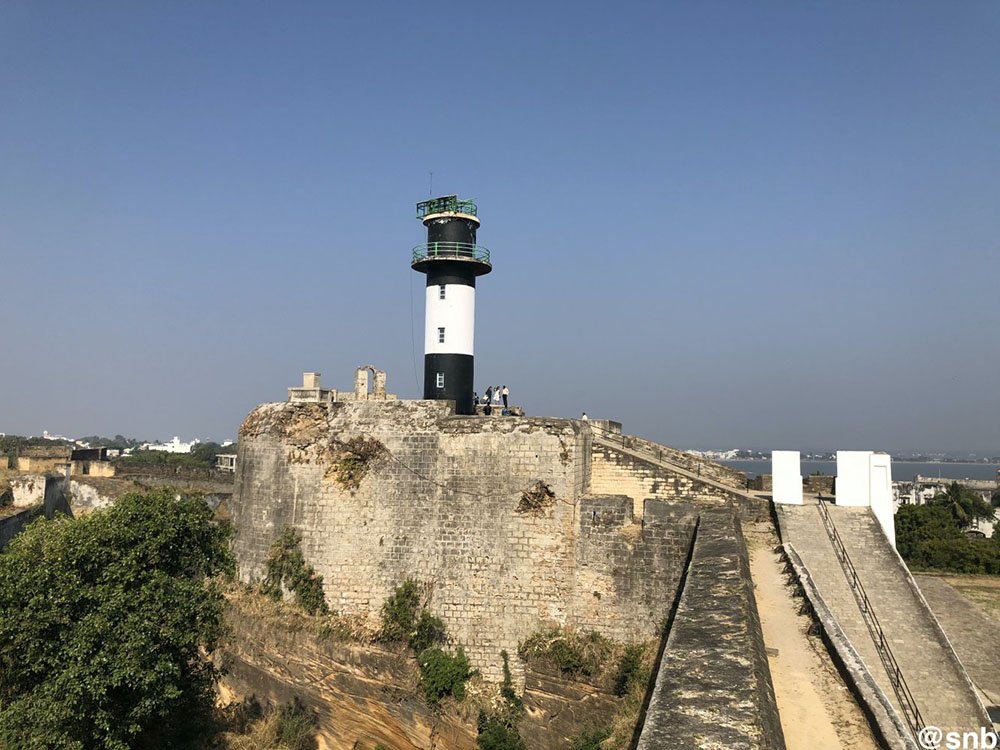 It took almost one hour to finish the visit. Then I returned to the hotel. But before that, I went to Nagoa beach to pick up some fried pomfret from the open food court located across the road of Nagoa beach.

We started the second half sightseeing of the day around 4.30 pm, this time with a full battalion. The first destination was INS Khukri Memorial.

INS Khukri is the memorial site of the Indian Naval Ship that sank during the Indo-Pak War of 1971. When Pakistan fired torpedo shots on December 9, 1971, destroying the submarine and eventually resulting in the sinking of the ship with 18 officers and 176 sailors on board.

The memorial was set up in 1999 to commemorate all the martyrs including the commanding officer of INS Khukri, Captain Mahendra Nath Mulla. It is a stark reminder of the sacrifice made by the crew since they had an option to surrender, but the Captain chose to sink the ship instead of succumbing to the enemy. For this courageous act, Captain Mahendra was also honored with the Mahavir Chakra.

The memorial, a scale model of the INS Khukri sits atop a hillock, edged in a glass case facing the sea. The place was fairly crowded when we went there. 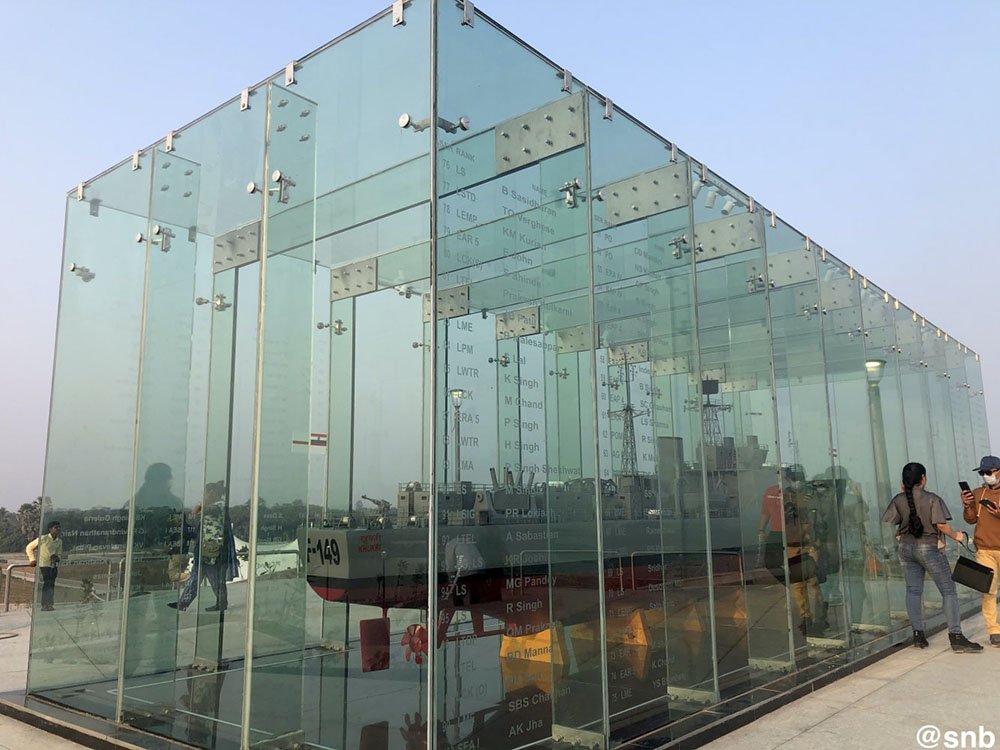 There is a well-paved walkaway to reach the top from the foothill. There is a temple mid-way on the western side of the hillock. 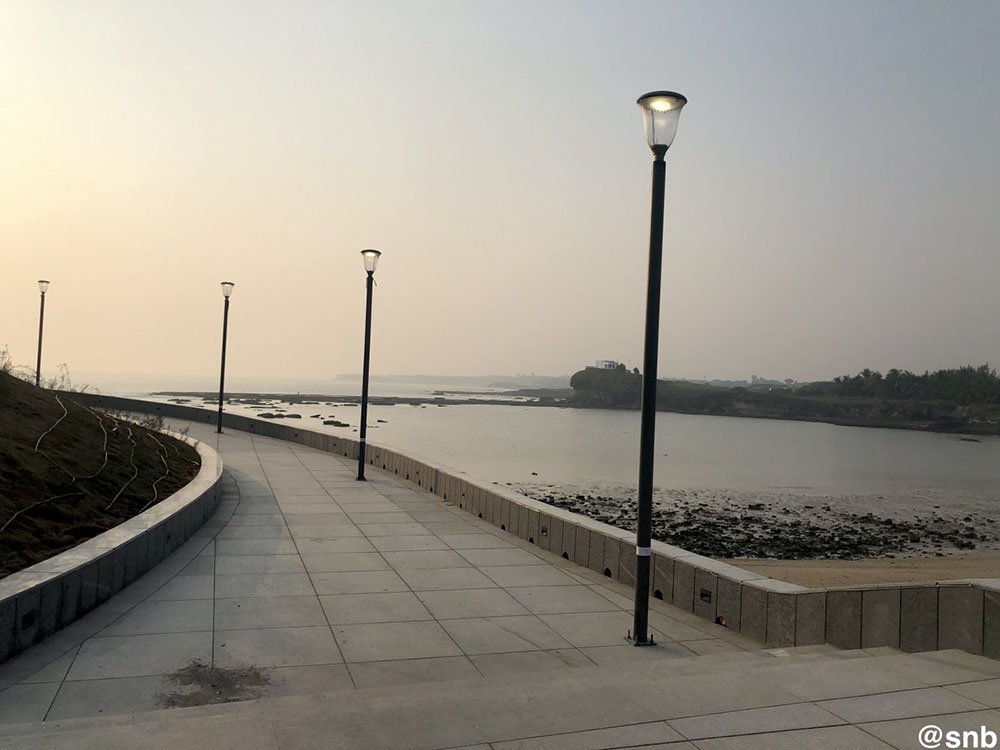 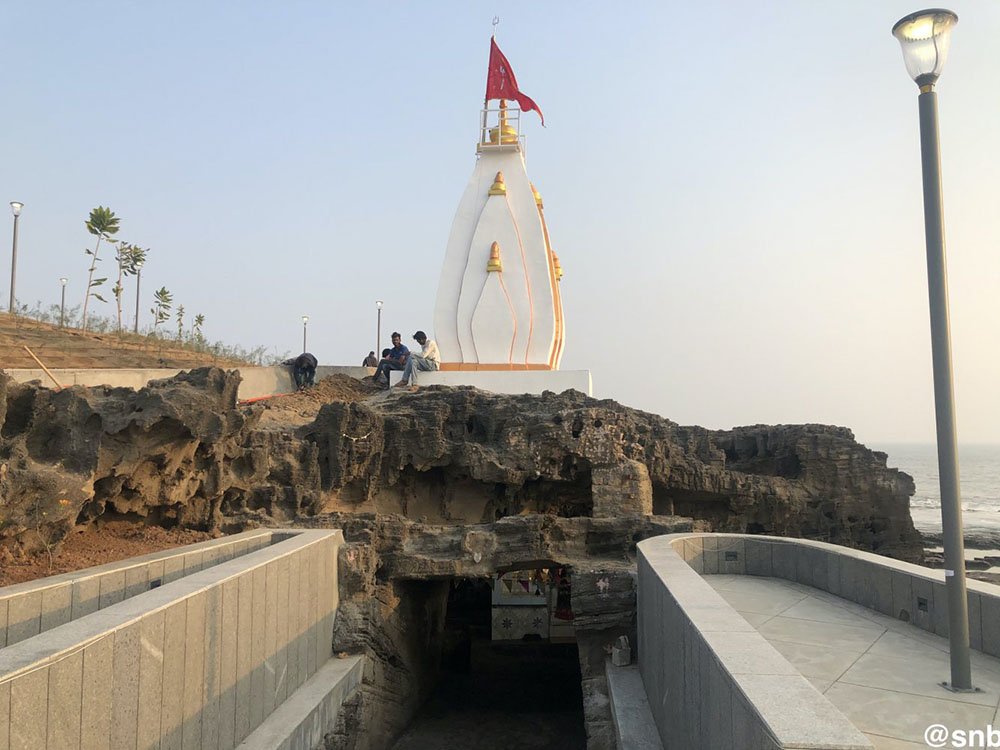 A gallery has been constructed on the sea-facing side of the hillock. We sat there for some time to enjoy the beauty of the Arabian sea and the setting Sun. 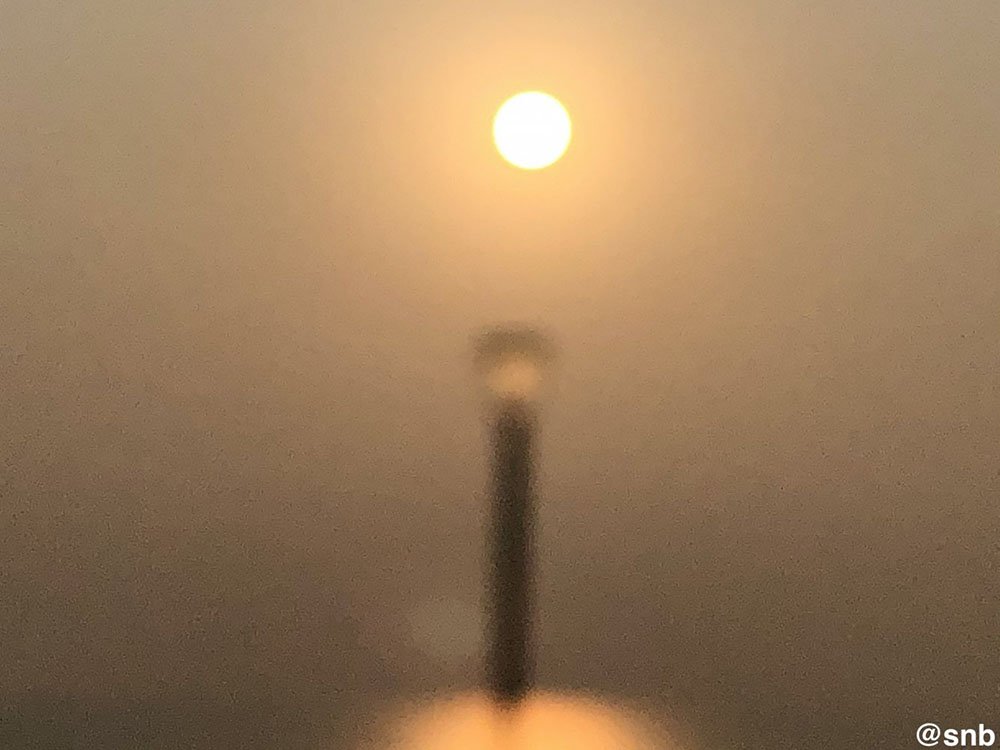 We reached there around 5.45 pm. The parking lot is at a distance from the temple. From the parking lot, first, we crossed a gate and then reached the temple walking on an uneven rocky plain without many gradients. Along the walking path, there were canopies and benches for taking a rest and enjoying the beauty of the surroundings. 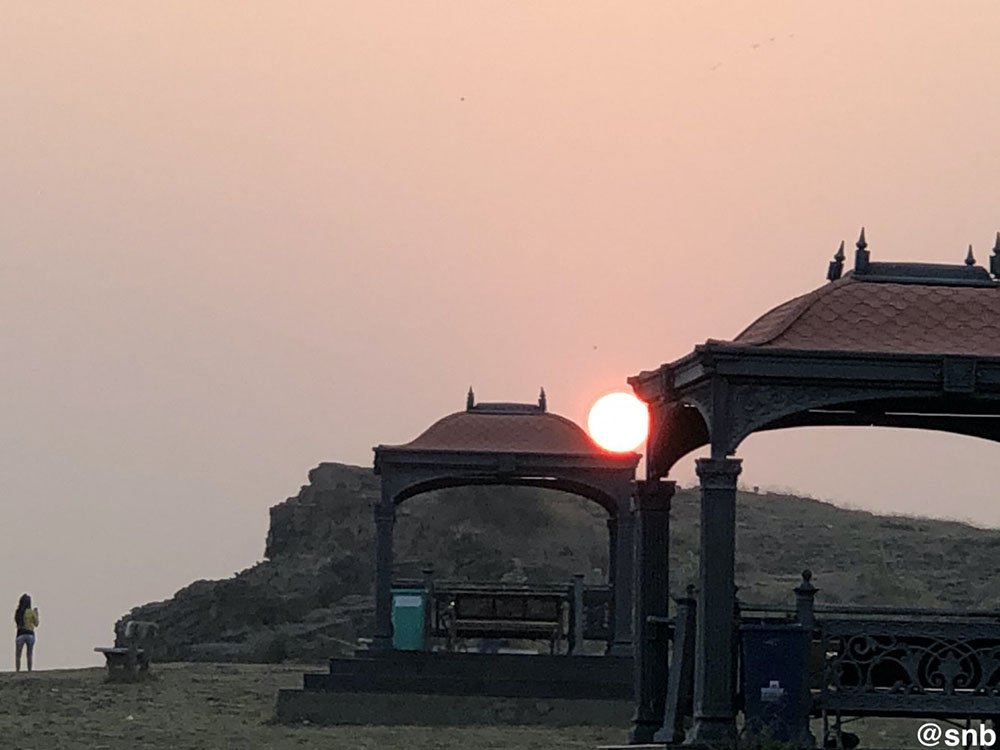 This temple is a cave temple located amid rocks on the seashore and is an essential religious site in Diu. The statues of Lord Ganesha, Lord Vishnu, and Goddess Lakshmi can be found at the entrance of the temple. As per legend, it is an over 5000 years old temple that has the presiding idol of Gangeshwar, who is considered to be the Lord of River Ganga and a form of Lord Shiva whose tresses descend the river on earth. The temple possesses five Shiva Lingam of different sizes that are believed to be built by the Pandavas. These lingas are submerged in the sea during high tides and only during the low tides are the tips visible. 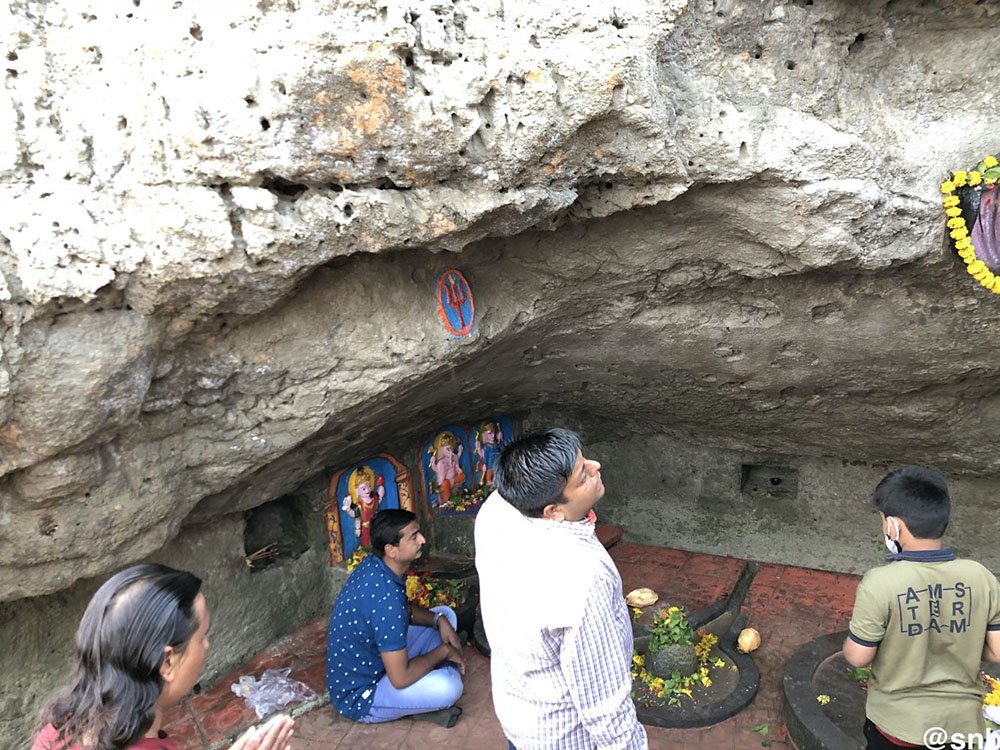 After visiting the temple, we sat on one of the benches for some time to experience the cool bridge coming from the Arabian sea. 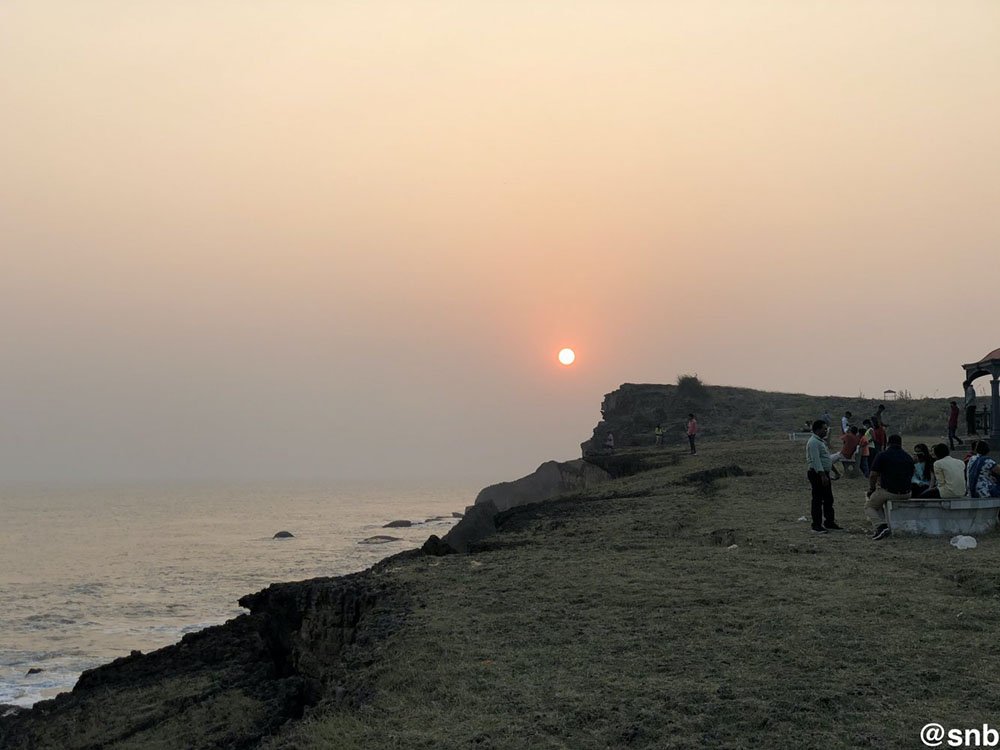 We started from there around 5.55 pm for the next destination - Gomtimata Beach.

This pristine white sand beach is located on the western end of Diu in Vanakbara Village, at a distance of approximately 13 km from Diu town. There is a temple dedicated to Gomati Mata, which is a graceful marble architecture. The beach was named after the temple of the Hindu goddess Gomti.

We reached Gomtimata beach around 6.15 pm. By that time the sunset was over. Since it was getting dark, we did not go to visit the temple. We kept our activities restricted to quiet strolls. It was surreal dusk. 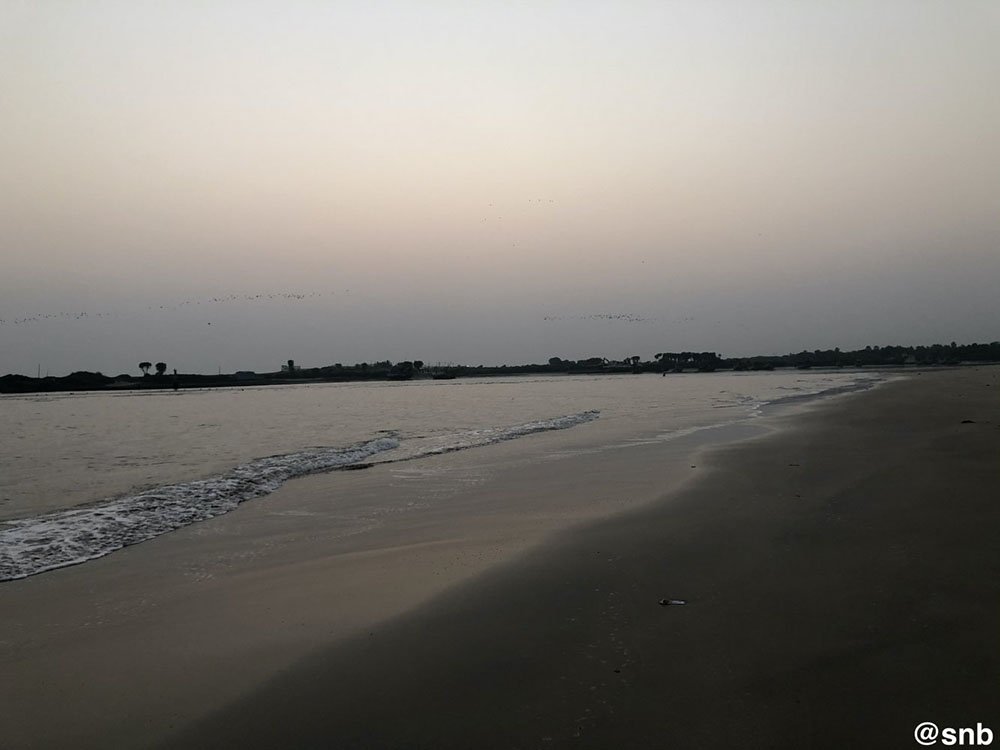 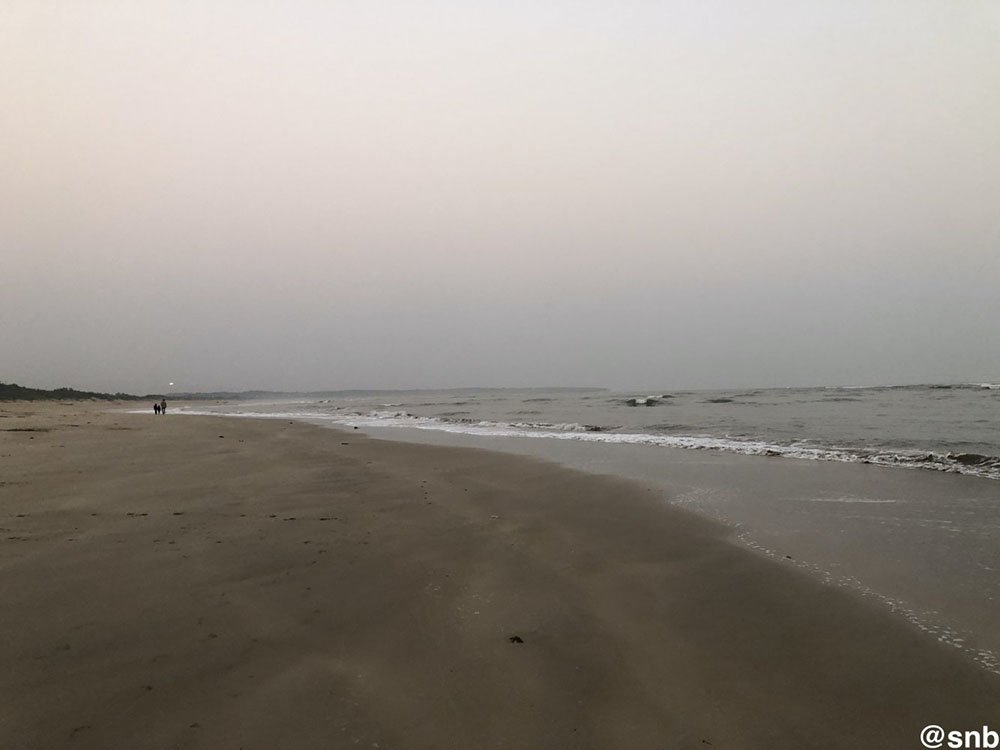 Since this beach is at a distance from Diu town, many visitors do not come to this beach. However, if you look for serenity and a moment of solitude you may come to this hushed beach whenever you are at Diu.

Gomtimata beach was the last destination of the day. While returning to our hotel from there, we took a break at Nagoa beach since it was on the way and spent some time there. 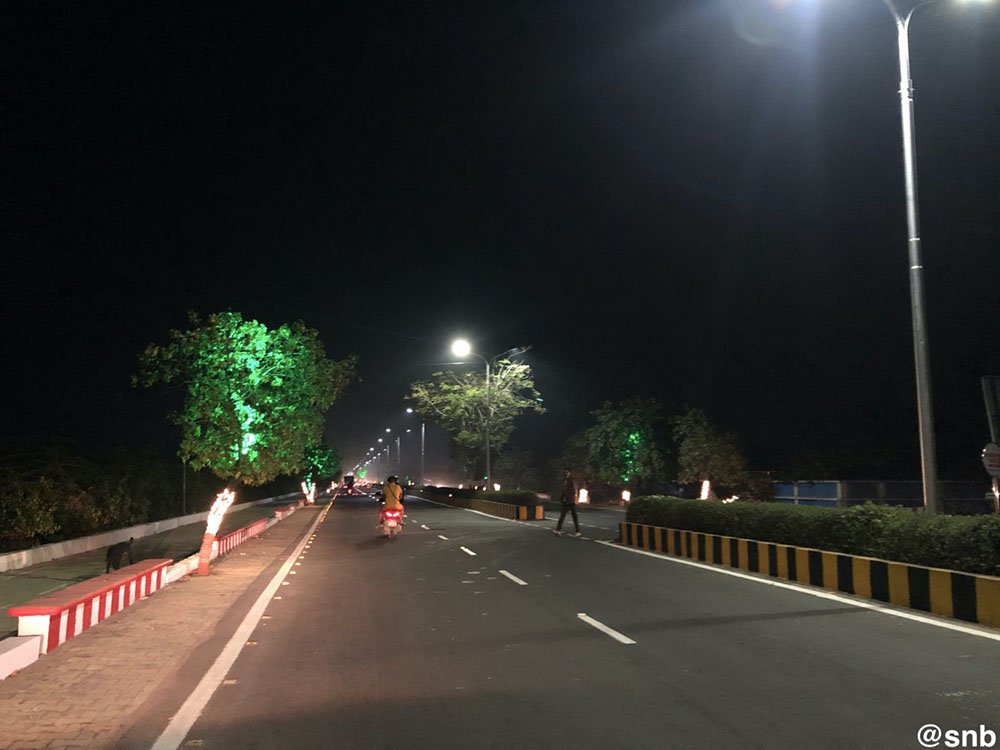 Though it was 31st December night, because of Covid 19 restriction, no normal new year celebration was taking place in Diu. We had a quiet dinner at the resort, called family members and friends to wish them a ‘happy new year’, and then went to bed.